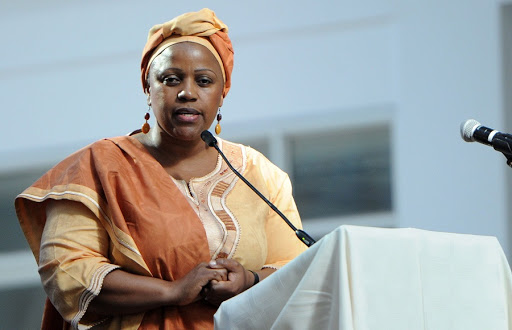 Former SAA chairperson Dudu Myeni is applying for leave to appeal against a judgment which declared her a delinquent director for life.
Image: GCIS

The judgment which declared the former SAA board chairperson a delinquent director was a classic case of judicial plagiarism, Dudu Myeni's legal team has argued.

Dali Mpofu, Nqabayethu Buthelezi and Noxolo Kekana made this submission in their heads of argument whereby Myeni seeks to appeal the order made by judge Ronel Tolmay in May this year.

Myeni is also appealing against an application by the Organisation Undoing Tax Abuse (Outa) and the SAA Pilots Association (Saapa) where the two organisations seek the execution of Tolmay's order.

Myeni's advocates said in heads of argument, filed on September 25, that what was expected to be an impartial and objective judgment of the court on Myeni in May was anything but.

“The judgment as a whole has only 21 paragraphs (7%) out of 285 paragraphs that can be said to be the court's own words. In the circumstances, this is classic case of judicial plagiarism,” Myeni's advocates said.

“The problems presented by the current situation is that in copying the entire judgment of (Outa and Saapa), the court has ended up not dealing with crucial legal questions and evidence that are central to the issues.”

They said the gaps in the judgment demonstrated the lack of impartiality in how the court had dealt with the matter.

“Justice has not been served in this instance,” they argued.

The advocates claimed the court also erred in imposing a life ban on Myeni, meaning she must never hold the position of company director for the remainder of her natural life.

“Not only is such sanction unprecedented and unwarranted in the circumstances, but it also clearly induces a sense of shock and is 'disturbingly inappropriate',  to borrow from the criminal law of punishment and sentencing,” they said.

“These factors automatically entitle the appeal court to interfere on the grounds of misdirection.”

Dudu Myeni says she cannot understand why she is being held accountable individually for decisions made by the SAA board as a whole during her tenure ...
News
2 years ago

The advocates said Tolmay's referral of the matter to the National Prosecuting Authority (NPA) smacked of unnecessary exposure of Myeni to further punishment on top of the life ban.

“This may result in double jeopardy or double punishment.”

In their heads of argument opposing Myeni's leave to appeal and its application for the enforcement of the delinquency, filed on September 4, the organisations said the question in the appeal was whether the order was correct on the totality of the law and evidence.

“Myeni's nit-picking about some of this court's findings does not establish any reasonable prospects of success on appeal, particularly as an appeal lies against the order and not against specific reasons set out in the judgment,” said Carol Steinberg, Chris McConnachie and Nada Kakaza, who are Outa's and Saapa's counsel.

They said the high court made multiple findings against Myeni, any of which was enough to justify the court's declaration of delinquency for life.

“The majority of these findings are not addressed, including the multiple findings of dishonesty, wilful misconduct and recklessness,” they said.

However, advocates for Myeni said on a proper analysis of all the evidence, it revealed differences in opinion and boardroom battles among executives over how things should have been done at SAA.

“It is from the biased and distorted narrative of these battles that the court has erroneously found the applicant's conduct fits that envisaged under section 162(5)(c) of the Companies Act,” argued Myeni's lawyers.

The section empowers the court to declare a person a delinquent director if that person, while a director, grossly abused his or her position.

Former SAA chairperson Dudu Myeni's actions while running the airline and her failure to conclude two crucial deals were not mere negligence but ...
News
2 years ago