Family disappointed at man who passionately comforted kids at funeral 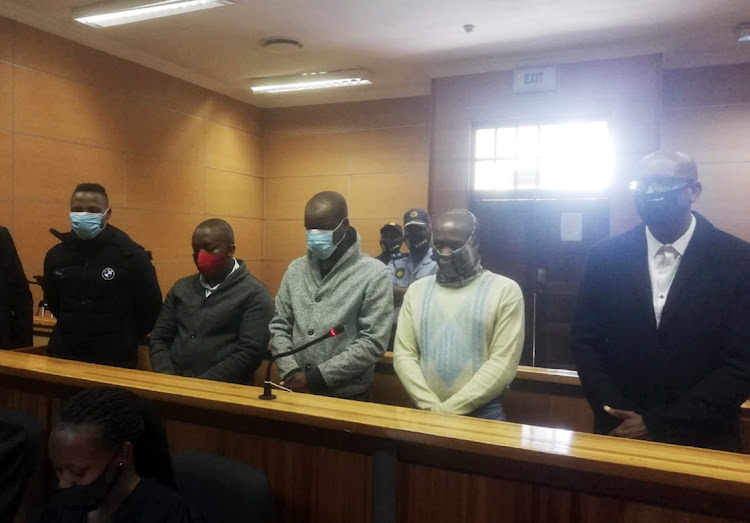 A husband Thabo Leshabane (black jacket) and his four co-accused appeared in the Polokwane Magistrate's Court for his wife's murder.
Image: PETER RAMOTHWALA

The husband of one of the two businesswomen who were killed execution style in Limpopo briefly appeared in court on Monday charged with his wife's murder together with four men.

Thabo Leshabane, 57, a husband to slain Makoena Mabusela-Leshabane, 46, appeared in the Polokwane magistrate's court together with Mbekezi Buthelezi, 25, Richard Zulu, 30, Sfiso Phigose, 34, and Emmanuel Dlamini, 30, in connection with the murder of his wife and her friend Tebogo Mphuti, 35.

The pair was gunned down on October 10 when they were about to view a warehouse in Magnavia, Polokwane.

All accused were charged with two counts of murder and conspiracy to commit murder. National Prosecuting Authority spokesperson Mashudu Malabi-Dzhangi said the red Hyundai Accent that belongs to Zulu was used in the commission of the murders. Malabi-Dzhangi said the state alleged that Leshabane hired the hitmen to kill his wife but the motive was still unknown.

Leshabane, who passionately comforted his children as they laid their mother to rest during the funeral, was named as accused number one.

Makoena Mabusela-Leshabane, 46, a senior aviation finance consultant, and her friend Tebogo Mphuti, 35, who was in construction and property, were ...
News
11 months ago

Murdered businesswoman feared for her life

One of the two businesswomen who were killed execution style in Limpopo at the weekend had been living in fear following an attempted car hijacking.
News
1 year ago

The case was postponed to November 2 for profiling of the accused. Mabusela-Leshabane's younger sister, Peggy Mafojane, said the family was "deeply disappointed that Leshabane is one of the suspects".

"We are further disgusted and shocked that Leshabane is the alleged mastermind in the murders. I mean, as husband we regarded him as one of us and now the children have lost both parents because one is dead and the other is in jail," she said.

A group of protesters marched and sang revolutionary songs in front of the court as they demanded justice for Mabusela-Leshabane and Mphuti.

Addressing the crowd, Mphuti's brother Thabo Makhema described Mabusela-Leshabane and Mphuti's relationship as that of blood sisters. "They were always together everywhere they go. We lost mothers and sisters, and most importantly, we have lost business pioneers," he said.

Mabusela-Leshabane was a senior aviation finance consultant and Mphuti was a property businesswoman.

Some of the protesters were clad in T-shirts with printed faces of the slain businesswomen.

The suspects were arrested last week at different addresses in Elsburg, Katlehong and Germiston on the East Rand.