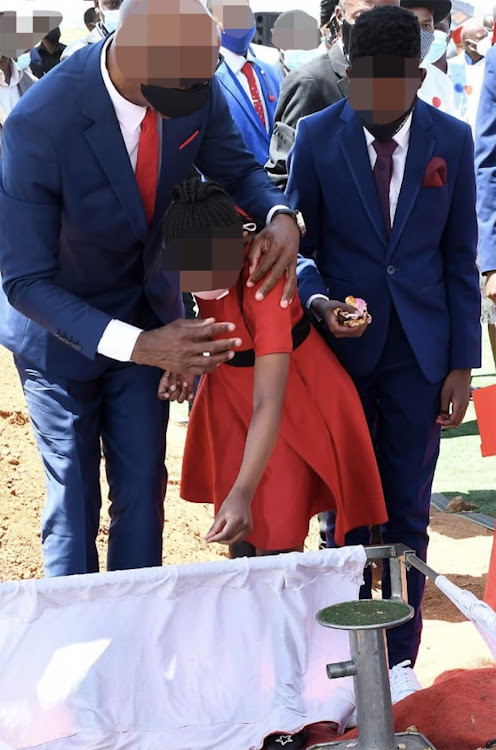 Limpopo husband who was arrested in connection with the murder of his wife ,during the funeral with their children.
Image: SUPPLIED

The husband of one of the businesswomen murdered execution-style attended her burial, cried and was seen comforting their children at the emotionally charged funeral just five days before his arrest.

Pictures leaked to Sowetan show the man in a navy blue suit, white shirt, red tie and a black mask with the letters RIP (rest in peace) together with his wife’s nickname and her year of birth and death.

In some pictures he can be seen comforting two children as they throw flowers into the grave.

Makoena Mabusela-Leshabane, 46, a senior aviation finance consultant, and her friend Tebogo Mphuti, 35, who was in construction and property, were shot at point-blank range and killed in a suspected hit while they were about to view a warehouse to rent in Magnavia, Polokwane, on October 10.

Five men, including the husband, were arrested on Thursday.

A friend close to the family told Sowetan that they were shocked that the husband, who attended the funeral of his wife in a dignified manner, was now a prime suspect for her murder.

“I was with the family the whole week and what shocked me the most  was the fact that no one thought he was [involved in] her death. Their children are still very young and it was very sad watching them trying to put brave faces as they sent their mother off and their father comforted them,” said the friend.

In a statement released yesterday morning, the spokesperson of the businesswoman's family said: “During this difficult time of bereavement, there aren’t enough words to express the pain and shock we are going through.”

Sowetan has removed the name of the spokesperson and the link to the businesswoman because it indirectly identifies the husband before he appears in court.

“We are yet to come to terms with the tragic passing of [name of deceased relative] whose love for her family, friends and especially her husband and children, was beyond measure,” said the spokesperson. 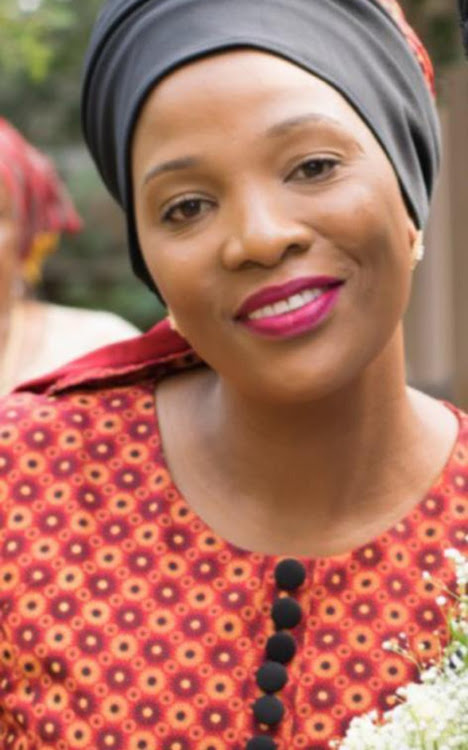 She said the family was grateful for the love, compassion and messages of support that have been pouring in from friends, colleagues and the public since the killings.

“The swiftness and speed with which the police apprehended the suspects has given us some measure of comfort that justice will be served,” the spokesperson said.

“We therefore appeal that we all must afford the police the time and space to conduct all necessary and thorough investigations to find answers to the dreadful events of 10 October 2020; events that led to the tragic passing of our beloved sisters,” she said.

Limpopo police spokesperson Brig Motlafela Mojapelo said the suspects were transported to Limpopo where the crime was committed and were expected to appear in court today.

Mojapelo said the Limpopo Provincial Investigating Team, the Tracking Team and the Magama Investigators conducted a well-coordinated and intelligence-driven operation and succeeded in arresting the suspects.

Mojapelo said a red Hyundai Accent, which was seen at the scene of the crime, was found at one of the properties owned by the husband.  Two firearms, two magazines and 13 rounds of ammunition were found in possession of his co-accused during the arrest on the East Rand.

Mojapelo said the 56-year-old husband was arrested in hospital on Thursday morning where he had been admitted after he allegedly attempted suicide.

“The suspects have been charged with two counts of murder, possession of illegal firearms and ammunition,” Mojapelo said.

The family of one of the businesswomen murdered in Limpopo says the pain over their loss worsened after learning that her husband was among five ...
News
6 months ago

Murdered businesswoman feared for her life

One of the two businesswomen who were killed execution style in Limpopo at the weekend had been living in fear following an attempted car hijacking.
News
6 months ago
Next Article