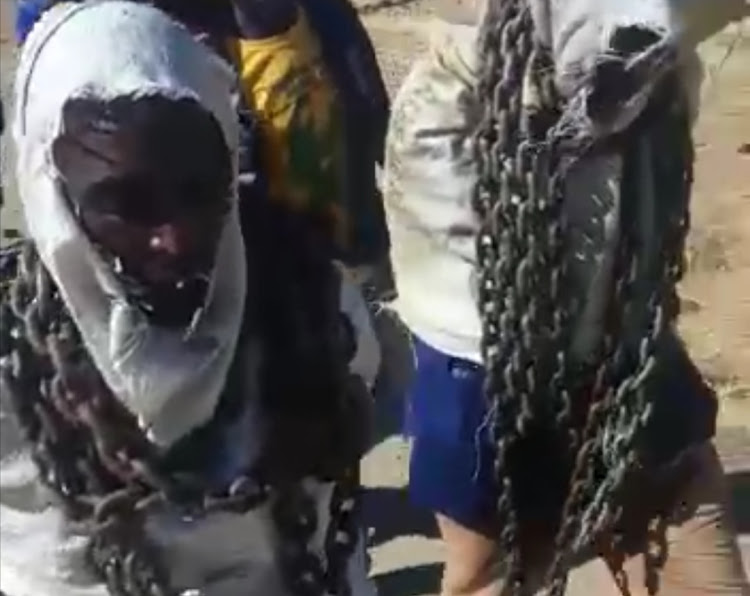 Two men who appear in a 30-second video clip bound in chains and marched through a rural community have been killed.
Image: SUPPLIED

Traditional leaders have condemned incidents of mob justice in the Eastern Cape after police confirmed that two men who appeared in a 30-second video clip bound in chains and marched through a rural community were killed.

Disturbing video footage of the incident was circulated on social media on Friday and police said two murder dockets were being investigated.

Police provincial spokesperson Col Sibongile Soci said on Saturday the case was under investigation by Cofimvaba detectives. “The investigation is at an advanced state and arrests are expected soon,” Soci said.

“The incident is alleged to have happened in the Woodhouse area, Cofimvaba, on 24 August. Detectives are in constant communication with the families of the victims and are keeping them updated on the progress of the investigation.”

A twin died and his brother is fighting for his life in hospital after they were caught allegedly stealing a TV in Jabulani, Soweto.
News
1 year ago

Western Thembuland King Siyambonga Matanzima’s spokesperson, Nkosi Temba TT Matanzima, was one of the people who saw the video and he was shocked to learn that the incident had happened at Woodhouse, one of the villages neighbouring the kingdom’s Qamata Great Place.

“'The shocking video has been trending since Friday,” Matanzima said. “There is a high rate of stock theft that provokes communities. However, nobody has a right to kill anyone. People must not beat or kill suspects, but hand them over to the police so that they can be sentenced by the  court of law. Like everyone else, they have a right to life. Two wrongs don’t make a right. The law must take its course.”

Matanzima forwarded the video to traditional leaders in Woodhouse and surrounding areas and expected a strong response, though he said police investigations should not be interfered with. There have been about 20 stock theft-related killings in the province since January.

Soci said suspected stock thieves must be handed over to the police so they could brought before courts.

She said police “continued to make inroads in the fight against stock theft and large numbers of stolen stock were recovered through structured operations and these are returned to their rightful owners”.

Gauteng police rescued a victim of mob justice who allegedly spent two days partially buried in a makeshift grave at Avalon Cemetery in Soweto, south ...
News
1 year ago
Next Article