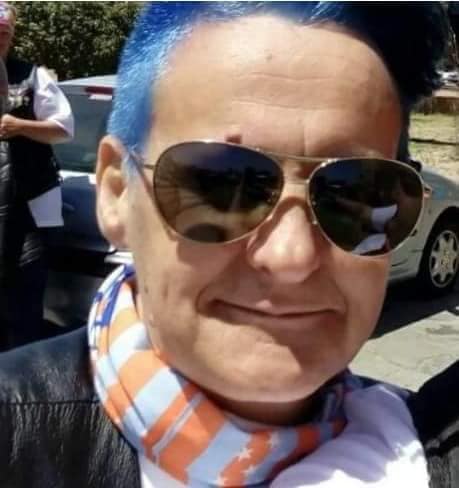 The high court in Cape Town handed one of her attackers, 24-year-old Elton Abrahams, a 20-year jail sentence for murder and 10 years for robbery on Tuesday.

The sentences will run concurrently, meaning he will spend 20 years behind bars.

Van Niekerk, 45, was shot in broad daylight on a busy Cape Town highway in 2018.

Abrahams entered into a plea and sentencing agreement with the state.

His co-accused, Michael Pietersen and Lucian Ackerman, were the first to enter into plea and sentencing agreements. In February, the court handed Pietersen an effective 25-year jail sentence while Ackerman got life.

The three admitted to being driven by the need to feed their drug habit when they cornered, robbed and shot the stranded motorcyclist.

“On September 28 2018 [Abrahams] met up with Lucian Ackerman and Michael Pietersen,” the judgment reads.

“They smoked a pipe of Mandrax and dagga. They then decided to rob people to obtain money for more drugs. Though he was under the influence of drugs, he admits that he was still capable at all relevant times to differentiate between right and wrong and to act in accordance with his capability. He was also able to give a clear and comprehensive account of his actions at that time.”

Ackerman told them that he had a firearm, the judgment says.

Sixteen protesters - among them students and at least one biker - have been released on warning and told to appear in court in six weeks' time after ...
News
1 year ago

The Cape Town high court has thrown the book at two men who robbed and killed motorcyclist Zelda van Niekerk.
News
1 year ago

“They decided to go to Summer Greens, but didn’t find anybody to rob and decided to return to Factreton. While walking back, they spotted the deceased as they approached the railway bridge on the N1 Highway, direction Cape Town. They approached her, Michael Pietersen then proceeded to grab her backpack but she resisted. She tried to stop motor vehicles along the highway, but to no avail,” the judgment reads.

“As the deceased resisted and tried to flag down motorists, Lucien Ackerman shot her in the abdomen.”

Pietersen grabbed the backpack and they all ran away.

“[Abrahams] stood guard while the murder and robbery were committed,” the judgment reads.

“They discovered R3,000 cash in the wallet of the deceased. They shared the money equally among themselves. He [Abrahams] admits that he knew that Lucian Ackerman belonged to the American gang and had violent tendencies.

“The accused is accordingly guilty of the offences of murder and robbery with aggravating circumstances.”

“She was the founder and pioneer behind the charity group ‘Bikers with a Cause’,” the judgment reads.

“She had just collected R3,000 for T-shirts that she had printed. She and her friend Cheryl Sandman were on their way to escort a matric pupil to his matric ball. The deceased waited for her friend, Cheryl, underneath the railway bridge. That was their usual meeting place, as they felt safe to stop there. The deceased sent a WhatsApp message to her friend, who was on her way to meet her. She had just climbed off her motorcycle to wait for a fellow biker when she was robbed and killed.”

“Minutes later, Cheryl Sandman arrived only to find her friend lying on the road with a gunshot wound to the abdomen,” the judgment reads. “The deceased passed away in hospital later that day same day.”

“The horrific murder happened in broad daylight. It was a brazen act with flagrant disregard for the life of another human being. A defenceless woman was robbed of her possessions and she was fatally wounded. The killing of a woman is an awful scourge which we face as a society. Her death sent fear throughout the biker fraternity who no longer feel safe to ride alone.”

Van Niekerk had just lost her life partner to cancer a few months before she was killed.

“The group ‘Bikers with a Cause’ lost their leader and lost momentum in the process,” the judgment reads. “They are struggling to deal with the loss of their leader.”

The judge said  Van Niekerk is survived by her mother and sister who are still struggling to come to terms with her untimely death.