Government asked for help with security equipment, training on farms 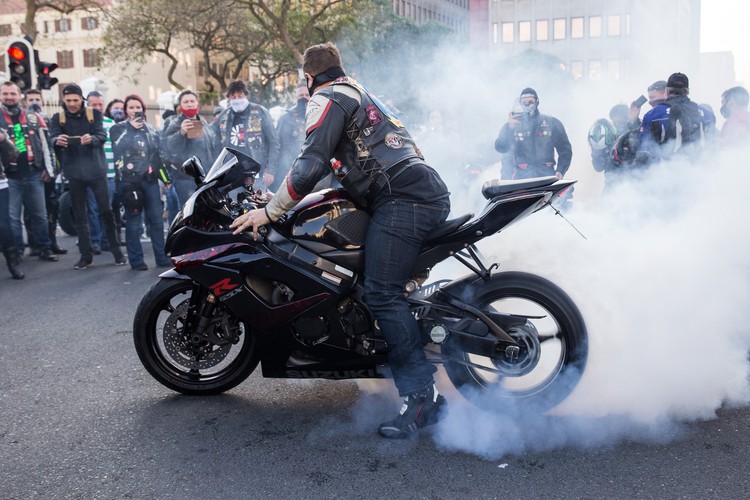 A biker “burns rubber” during the protest outside Parliament against crimes on SA farms.
Image: Ashraf Hendricks/GroundUp

Hundreds of motorbikers roared down Roeland Street in Cape Town on Saturday morning to protest against farm murders.

They gathered outside parliament in leather jackets and long boots carrying placards saying: “Stop farm killings” and “No farms, no food”. Some bikers performed “donuts” (spinning around on their bike wheels).

“The government is not doing anything about our farmers being murdered,” said Debbie Els of the Stop Farm Murders Attacks Movement.

She called the murders “terrorist attacks”. She said that the protest was taking place because they were “gatvol” and making a stance.

Reading out a memorandum to the crowd, Els said: “Farm attacks and farm murders are blatantly being ignored.

“Without farmers we are facing hunger.”

Els said that farms are soft targets for crime because of their remote locations and that farms need to be protected and labelled a “national keypoint”.

Some of the demands include protection from the state and assistance with security equipment and training. “We need to ensure that we secure our bread basket,” she said.

No-one came to accept the memorandum. 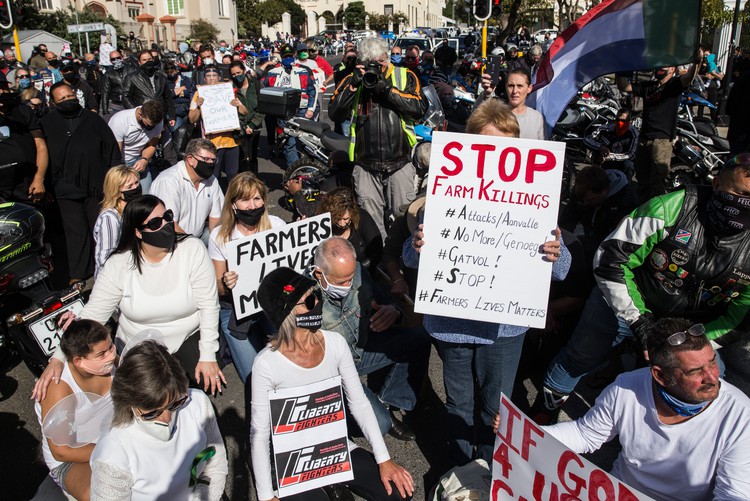 Hundreds of people, many on motorbikes, protested outside Parliament on Saturday morning against farm murders.
Image: Ashraf Hendricks/GroundUp

AfriForum estimates that there were 57 farm murders in 2019. Last year the group warned that the number of farm attacks in the Western Cape “increased extremely”.

Sihle Ngobese, who goes by the name of Big Daddy Liberty, called for all South Africans, regardless of race, to unite.

“In this country, it is the politicians who try and divide us,” he said.

Ngobese said that he was proud to see South Africans standing up for the farming community. “I love our flag. I love our family and I call for freedom!” he said. “It is time for us to draw the line in the sand and say enough is enough.”

“People are killing the people that feed us,” said Vanessa Minnie. “We need to support our farmers and save their lives”.

She said that the government needs to acknowledge that there is a problem and have forums in place to deal with the issues.

The agricultural sector has been hit by 26 farm murders since the start of the year, TLU SA said on Tuesday.
News
1 year ago
Next Article