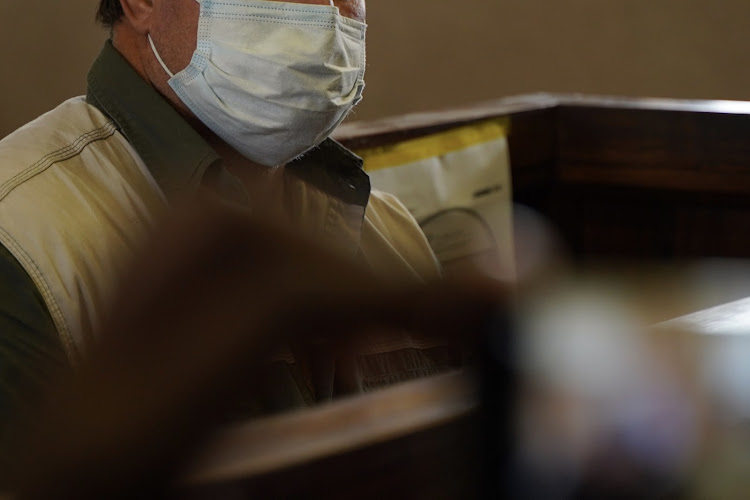 A Senekal businessman appeared in court on Friday on, among others, a charge of terrorism.
Image: Emile Bosch

The 51-year-old businessman arrested after a fiery protest in Senekal in the Free State this week has a previous suspended conviction for theft. The court ordered that the man not be identified till the outcome of his bail application.

This was revealed in the affidavit of the man, who owns a construction company, when he appeared in the Senekal magistrate's court on Friday morning.

The affidavit, read out by his lawyer Jacques Potgieter, stated that the man  lived in Senekal. He asked the court to release him on bail.

His family and friends sat in the second-last row of the courtroom. Before proceedings got under way, the court refused to allow a live broadcast of the proceedings, but granted an application to take photos and videos.

The suspect's lawyer indicated the man intended to plead not guilty to all charges. Initially, the man was only charged with malicious damage to property and public violence, but the court heard on Friday that he now faced two additional charges of attempted murder and terrorism.

Later during the court case, a senior officer also recounted how a witness stated that someone bought petrol from the local fuel station, put it in a  black plastic bag, and then passed it over the fence where it was allegedly used to set a police van alight.

In his affidavit, the suspect said he had a SA passport which had expired, was married and had two daughters. Indicating his close ties to the community, he said his company could not function without his presence.

Already his family was suffering without his financial contribution, he said, adding that his wife, a teacher, earned R4,000 per month.

He admitted to a theft conviction in 2011 which was wholly suspended for three years on condition that he paid the money back.

The man told the court in his affidavit that he was bipolar and on chronic medication.

The state called Brig Tshokolo Posholi,  provincial head of the organised crime and commercial crime units in the Free State and assigned to lead the investigation, to the stand.

Posholi told the court that it was not in the interest of justice to release the Senekal man on bail. He said on Tuesday, police holding cells were damaged when a group of farmers demanded the release of the two men accused of the murder of farm manager Brendin Horner.

He said that inmates in the holding cells were also injured. He told the court that two shots were fired in the hallway and a police vehicle was set alight after an instruction by a businessman.

Posholi testified that a female warrant officer clad in full uniform who attempted to prevent them from entering court, was threatened and throttled by the man. He said that if the man had not throttled the female officer, extensive damage to the court property would have not happened.

The court heard the accused was a violent person and his actions, aimed at the two accused, showed “an element of resentment”.

According to Posholi, in the first clip the man made a call to those in attendance to accompany him to the cells of the two murder accused.

In the second video clip, the man confronted a female officer and asked her to move. He then assaulted her and pushed her away. The violence was as a result of the speech made by him, Posholi said.

Defence attorney Potgieter argued that his client did not make the call for violence and was not involved in the setting alight of the police van.

Potgieter said two witnesses will tell the court that his client was not seen in the court building or police cells.

However, Posholi maintained that the man was involved.

“How was he involved?” Potgieter asked. “He damaged the window of the court cell, by hitting it with a flag. He was not alone, he was assisted by a mob.”

He claimed that his client was pushed by the warrant officer and that he had not throttled or assaulted the woman.

Potgieter told the court that Posholi's statements were “far-fetched”.

He said that Posholi was pursuing an “arrest to investigate, not investigate to arrest” strategy, which the officer disagreed with.

The state alleged that the accused was the leader and had incited the actions that led to the chaos. Judgment on the man's bail application has been reserved until Tuesday.

A 52-year old man was arrested on Wednesday for his involvement in Senekal violent protests.
News
1 year ago
Next Article