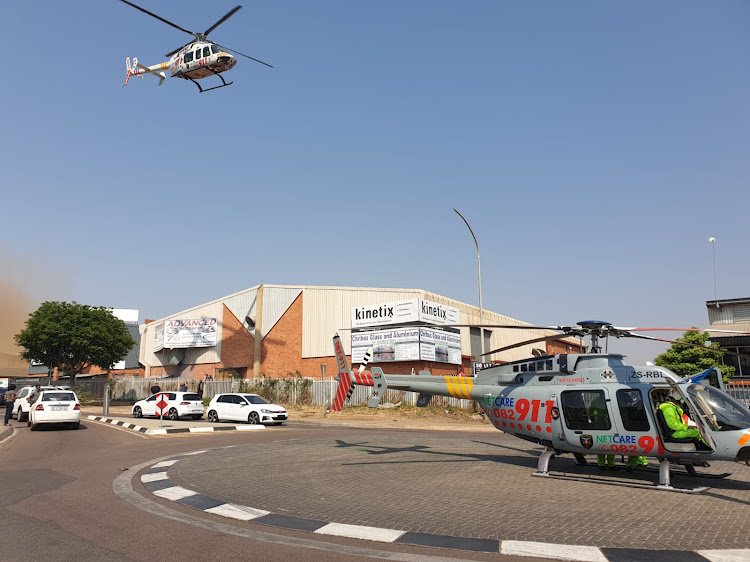 Two police officers were airlifted to hospital on Thursday morning after a shoot-out in Centurion.
Image: Netcare911

Two men fatally shot by police in Centurion, Pretoria, on Thursday were allegedly implicated in a spate of hijackings in Gauteng.

Police spokesperson Brig Mathapelo Peters said two suspects who survived would be charged with attempted murder, possession of unlicensed firearms and ammunition, and possession of a hijacked vehicle. More charges may be added pending further investigation.

Netcare, along with other emergency services, responded to a shooting on Jakaranda Street at about 9am in Centurion. There was a shoot-out between the suspects and police.

Both patients were treated on the scene. Once stabilised, they were airlifted to hospital.

“Members of Gauteng specific crime trio team had been following and keeping close observation on the suspects when they spotted [them] in Centurion driving a black BMW 135i. Police intercepted the suspects' vehicle and the suspects allegedly started firing shots at the police who then returned fire.

“Police seized two rifles and a pistol, as well as the suspects' vehicle, which has since been confirmed as having been hijacked in Honeydew, Johannesburg, in July,” said Peters.

Gauteng police commissioner Lt-Gen Elias Mawela commended the investigating team for working hard to decrease hijackings. He warned criminals that the space they operated in would be squeezed to the minimum.

Police have launched a hunt for two men, and possibly more accomplices, who ran over six children, killing a 13-year-old, while evading arrest after ...
News
1 year ago

Police have opened a case after five men attempted to hijack an unmarked flying squad vehicle in a plan that backfired early on Monday.
News
1 year ago
Next Article