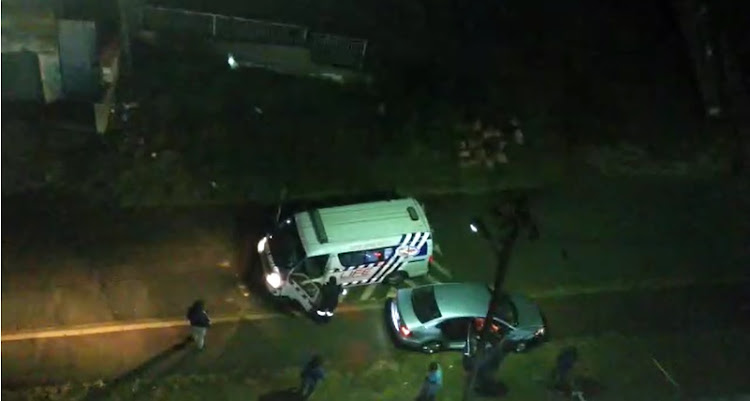 The scene of the crime in which a husband and wife were shot in a botched hijacking in Mayville on Thursday night.
Image: Supplied

A husband and his wife were shot during a botched hijacking and exchange of gunfire between police and armed men in Durban on Thursday night.

According to police, the incident occurred in Mayville shortly after 7pm.

Police spokesperson Col Thembeka Mbele said members were conducting crime prevention duties when they received information of an attempted hijacking in the Mayville area and proceeded to the scene.

Alleged KZN taxi hitman arrested before he could say 'I do'

Mbele said: “The five suspects spotted the police and opened fire. The police returned fire. During this interchange of gunfire, the suspects jumped into their vehicle and fled. After the suspects fled, police discovered a 29-year-old driver and his 27-year-old wife had sustained gunshot wounds.”

Leon Fourie of Life EMS said the husband was treated on scene for a bullet graze on the head, and his wife was treated for a gunshot wound in her leg before being transported to hospital.

Charges of attempted murder and car hijacking are being investigated by police.

A KwaZulu-Natal mother said her two sons are on the road to recovery after their father allegedly poisoned them and himself on Monday.
News
1 year ago

For newlyweds Dumisani Zondi, 46, and Thabile Ngcobo, 36, their wedding day will forever be etched in their memory as a day to remember for all the ...
News
2 years ago

A KwaZulu-Natal bridal couple will spend their first few hours as husband and wife behind bars after being arrested at their wedding on Sunday.
News
2 years ago
Next Article