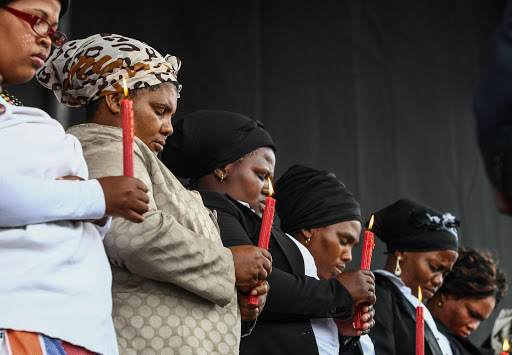 Sibanye Stillwater said it had handed over six houses to the widows of the slain Marikana mineworkers and has continued to educate the mineworkers' children and siblings.
Image: File / Simphiwe Nkwali

Sibanye-Stillwater — which took over the Lonmin platinum mine in Marikana, Rustenburg, where 34 miners were shot dead during a wage-related strike in August 2012 — said on Friday it was fulfilling the promises that Lonmin made to the widows of the slain mineworkers.

Sibanye CEO Neal Froneman addressed a virtual public lecture ahead of Sunday’s eight-year commemoration of the day when police opened fire on the striking mineworkers, killing 34 and leaving 279 injured or behind bars.

In total, 44 people died in events soon before, during or after the shooting on August 16.

Froneman was joined by former public protector Thuli Madonsela, who delivered the keynote address during the public lecture.

Froneman said when the company took over Lonmin in 2019, it did so fully aware of the history of the mine and knew that this meant “inheriting the legacy of the 2012 tragedy”.

Since acquiring the mine, Froneman said, they had made good on delivering houses to some of the widows of the slain mineworkers. Six houses had been handed over on August 10. While Covid-19 had hampered progress, Froneman said they would deliver 19 more houses before the end of the year.

Keeping to its earlier commitments, the mine had also given employment to a single family member of each of the deceased.

“This process was started by Lonmin because they wanted to ensure that the families continued to receive a sustainable income,” Froneman said.

Sibanye was still giving educational support to the children of the miners and, in some cases, siblings of the miners.

Froneman said this was achieved through the 1608 Trust, established in honour of the mineworkers.

“To date the trust has provided funding to 141 beneficiaries at a total cost of R32m,” Froneman said.

“This weekend, will be unveiling a memorial wall which will recognise and honour those who died,” Froneman added.

He addressed criticism that Sibanye had received from some mineworker representatives and unions who had questioned the mine's intentions for hosting the lecture.

Froneman said this was necessary to “reconcile with the past in order to collaborate for the future”.

August 16 marks the day 34 mine workers were shot dead by police at Marikana during protracted protests for better wages.
News
2 years ago

Some bemoan their living space, others are happy
News
2 years ago
Next Article