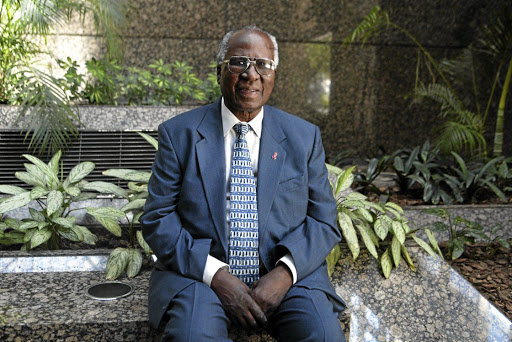 The late Struggle stalwart Andrew Mlangeni has been described as a man who was unwavering when it came to integrity, morals and ethics of ANC leaders.

This view was highlighted by many ANC leaders who spoke during Mlangeni's memorial service yesterday.

Mlangeni died last week following a short hospital stay. Those who spoke during the party's virtual memorial service spoke in glowing terms, especially during his time as the chair of the ANC's integrity commission (IC).

ANC stalwart Sophie de Bruyn said that Mlangeni always found a way to bring in the need for high moral and ethical values for the ANC into their discussions and debates.

"All members of the ANC who appeared before the IC were treated with respect and compassion regardless of their rank in the organisation," De Bruyn said.

"Another quality of his was that he never favoured any single view. His approach was fair and he never hesitated to take unpopular and difficult decisions."

During his tenure as the chairperson of the integrity commission, Mlangeni asked former president Jacob Zuma to step down over allegations of corruption and state capture. This, according to De Bruyn, showed that he never "hesitated to take unpopular decisions".

ANC Women's League leader Bathabile Dlamini said that Mlangeni never thrived on divisions which is why he, she said, did not view those who appeared before the integrity commission as his enemies.

"It's very clear also that he had a full understanding of the full might of the apartheid system and that is why he never thrived in divisions. After grilling you, for those who went to the integrity commission, he would never make you an enemy.

ANC veterans have slammed the move by the party to have former president Jacob Zuma headline a programme to pay tribute to the last surviving Rivonia ...
News
1 year ago

"He would talk to you nicely, treat you like a comrade and when you meet him you would expect him to act with a very negative and hard attitude but he would accept you as a member and leader of the ANC," Dlamini said.

Snuki Zikalala, the ANC's Veterans League president, who has been fighting against the party's decision to reinstate the two Limpopo officials implicated in the VBS Mutual Bank heist, said they would take forward the baton to ensure there was ethical leadership in the party.

"We dare not disappoint you," Zikalala said. "You have run the race, it is now up to the veterans league to ensure it intervenes authoritatively on all issues that affect the integrity of our glorious movement."

He said that they continue fighting to have those accused of corruption to step aside until their names have been cleared.

"As a member of the veterans league, we understand that those stepping aside in the face of allegations of corruption or unethical conduct is a question of principle. It should not be a question of being innocent until proven guilty.

"We will work tirelessly with our glorious movement to strengthen the ability of the ANC's integrity commission to act decisively," Zikalala said.

Struggle stalwart Andrew Mlangeni spent the last few hours with his son Sello, but they could not communicate.
News
1 year ago
Next Article