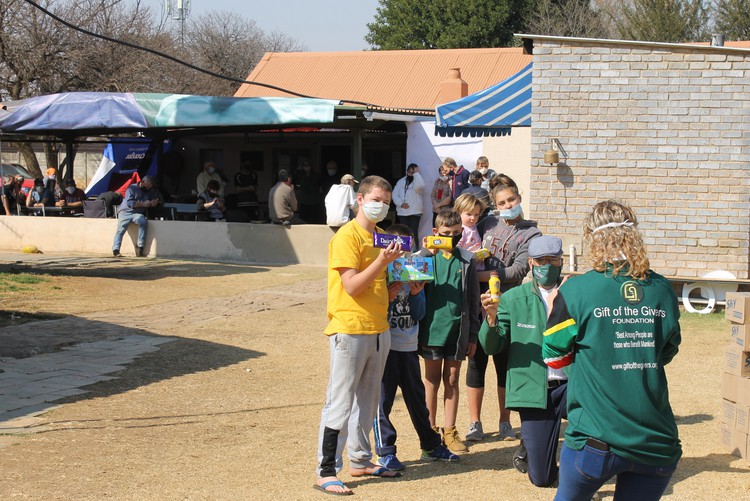 Gift of the Givers is helping to feed residents of Angel Wings in Benoni.
Image: GroundUp/Justin Brown

Wayne Morgan, a plumber and electrician from Roodepoort, is a recent arrival at Angel Wings, a shelter in Benoni on Gauteng’s East Rand.

He has lived at the shelter for two months. He lost his job when the company he worked for shut its doors at the start of lockdown. He stayed with family and in other shelters before finding Angel Wings. He hasn’t been able to get any more work.

Morgan said he appreciated the refuge the shelter offered and was grateful that people didn’t steal his property. When he was on the street, he had lost half of his possessions through theft.

He said he was grateful “to have the basics for now”.

Angel Wings received donations of food parcels from Gift of the Givers on Tuesday for the first time in its history of more than 20 years. It is home to 80 people, providing its residents with housing, food and clothing. It also helps them find work.

Those at the shelter are a mix of families and people who are pensioners, unemployed or homeless, and those with disabilities or severe medical conditions.

Phillip Oelofse, a resident at Angel Wings, said he used to work at a laboratory in Pretoria. But he ended up in a hospital intensive care unit because of a severe case of diabetes, which made him dizzy and left him struggling to stand, which hindered his work prospects.

“My sugar level was so high that I went into a coma,” he said.

He has lived at the shelter for 18 months. He said the community at Angel Wings is “excellent” and “these people are my family”. He sleeps in a dormitory with four other men.

Circumstances forced the shelter to appeal to Gift of the Givers because funding from its usual donors dried up amid the Covid-19 pandemic and the consequent economic recession, Basil Hensberg, Angel Wings' fundraising manager, told GroundUp.

Hensberg said the shelter, which is in the economically depressed area of Putfontein in Benoni, usually sourced its funding from businesses and individuals in industrial areas like Vereeniging, Vanderbijlpark and Witbank (Emalahleni).

Many of these businesses had diverted their budgets to deal with the pandemic, including buying personal protective equipment, and many had lost significant income during the lockdown, he added.

Roslyn Toontas, a Gift of the Givers volunteer, said the shelter had appealed to the organisation as they were “in quite a bad way”.

Angel Wings residents are not alone in facing a dire situation.

Researchers who contributed to the National Income Dynamics Study – Coronavirus Rapid Mobile Survey published this month, found that 47% of 7,000 people surveyed reported that their household ran out of money to buy food in April this year when the lockdown was at its severest.

Dr Imtiaz Sooliman of Gift of the Givers also told GroundUp this month that hunger in SA was at its worst since the establishment of the organisation 28 years ago.

Hensberg told Sayed at the handover that the residents of the shelter were exceedingly grateful. “Thanks from the bottom of our hearts,” he added.

Each food parcel handed over to the Angel Wings residents can feed a family of five for a month, and, according to Toontas, costs between R480 and R500.

This is much less than the amount that you would pay at a retail store because Gift of the Givers purchases in bulk and receives donations from local corporations, she said.

Since the lockdown started on March 27, five extra people have joined the shelter, Hensberg said.

State regulations made it difficult for people to join the shelter as the government required a hospital Covid-19 clearance certificate before the shelter could consider receiving anyone, he said.

There was a risk that a person with the virus could infect other people and this was a particular concern for the older people at the shelter, he said.

Louise Boshoff, an Angel Wings director, told GroundUp that business closures were escalating on the East Rand, and many shelters like Angel Wings were springing up to deal with the growing poverty.

The shelter has several cost-saving measures in place, including switching off electricity from 7.30am to 4.30pm and drawing water from the borehole on its smallholding property, which has a vegetable garden and a goose enclosure.

Switching off electricity is essential given the rising cost of Eskom power, Boshoff said.

It costs about R75,000 per month to cover the shelter’s expenses, and more than R20,000 of this cost went to paying for energy, she said.

The non-profit organisation had also cut the number of trips made to the local clinic to twice a week to save costs.

The department of employment and labour has extended the Covid-19 Temporary Employee Relief Scheme benefit until August 15.
News
1 year ago
Next Article