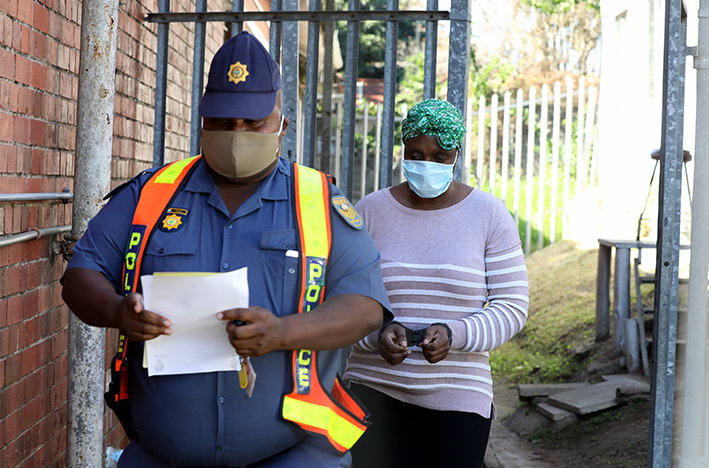 Fungai Nyamadzawo during a previous appearance at the Umhlali magistrate's court after the death of Alexia Nyamadzawo, whose body was found in a sugarcane field.
Image: Sandile Ndlovu

After a month of being detained for the alleged murder of her six-year-old daughter, the mental condition of a KwaZulu-Natal mother is said to have deteriorated.

Fungai Nyamadzawo, mother of slain Alexia, made a brief appearance in the KwaDukuza magistrate's court on Wednesday. The court heard that Nyamadzawo would undergo mental observation at Fort Napier psychiatric hospital on August 25.

Nyamadzawo was arrested after Alexia’s body was discovered hidden in a sugarcane field in Riet Valley, outside Glendale, north of Durban, on June 2.

Nyamadzawo's attorney Rakesh Maharaj told journalists that his client was unstable and on medication.

The KwaZulu-Natal woman accused of murdering her six-year-old daughter and dumping her body in a sugarcane field, is to undergo mental observation.
News
1 year ago

“She remains extremely unstable and emotional. I will be following up with the station commander at the KwaDukuza police station to ensure that she's properly monitored and that she receives medication. She is in need of observation and examination,” he said.

The 42-year-old mother is also charged with defeating the ends of justice after she allegedly told police that her daughter had been snatched from the back seat of her car while she was driving in the area with her two children.

In a previous appearance, magistrate Blanche van Eeden said medical records from two general practitioners and a psychologist showed “nothing wrong with her, no agitation or anything”.

However Maharaj argued that reports had been compiled before his client was arrested — one as early as March this year — and that new assessments would need to be done.

The matter will be back in court on July 27 for monitoring purposes before Nyamadzawo is to undergo her mental observation a month later.

The office of the KwaZulu-Natal director of public prosecutions is to determine whether the criminal capacity of Fungai Nyamadzawo - accused of the ...
News
1 year ago
Next Article