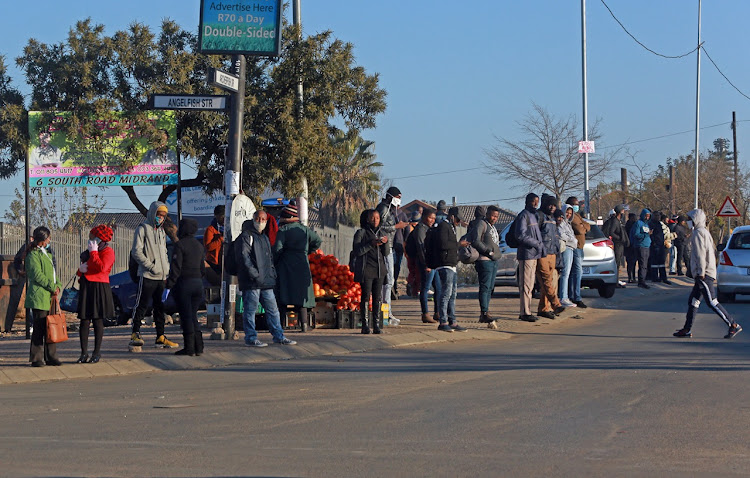 Thousands of commuters across Gauteng were left stranded after Santaco announced a strike to protest against the 'inadequate' R1bn government relief package for the industry.
Image: Thapelo Morebudi/The Sunday Times

The only thing stranded commuters could do on Monday was hope they could find alternative transport to get to work on time and avoid the prospect of “no work, no pay”.

“We have been told to come to work because they said either you come or you don't get paid,” a commuter at the Phumulong taxi rank in Atteridgeville told SowetanLIVE's sister publication TimesLIVE.

“We don't know what taxi drivers are protesting for. When we use buses they remove us. Why are they disrupting us? We have lost our salaries for today. If they continue tomorrow it means we will be losing more,” she said.

There were no taxis operating at the rank on Monday morning. The area resembled a ghost town.

Thousands of commuters across Gauteng were left stranded after the SA National Taxi Council (Santaco) embarked on a strike to protest against the R1bn government relief package for the industry.

Santaco said in a letter “we were expecting at least R20,000 per vehicle” but would receive significantly less out of the package announced by transport minister Fikile Mbalula.

Roads were barricaded, and in one incident a Tshwane metro bus was hijacked.

The 30-year-old woman, the main breadwinner in her family, said the loss of income would affect them “greatly”.

“They said in July there will be a fare increase. If they are disrupting us, how do they expect us to get more money for the increase when this day will be unpaid because we couldn't get to work?” she asked.

Another commuter, Lefa Mlate, said his employer had asked him to make alternative  transport arrangements.

“I have been standing here hoping something will come up, but so far nothing has. My boss has been telling me to keep trying to get to work but there is nothing. Even those I know who used private cars were turned back,” he said.

Thami Sizani, a teacher at a school in Randpark Ridge, arrived at the Baragwanath taxi rank in Soweto and was told to “go back home”.

“There are no taxis today and we have been waiting here. We were told taxis are not moving today and we must go back home.”

#Taxistrike A taxi blocking the road has been impounded by police. Other drivers have now moved to clear the road. pic.twitter.com/1TmzqGnXLv

Send this to your boss don't wake up its Kempton Park Taxi rank #Taxistrike pic.twitter.com/3s7kdREnaP

Police have been forced to use rubber bullets to disperse protesting taxi drivers who have closed the R55 in Laudium, Pretoria.
News
1 year ago

Taxi strike forces some commuters to walk to work

While some of the commuters tried to hitch hike from the private vehicles, others simply started walking towards their places of work.
News
1 year ago
Next Article