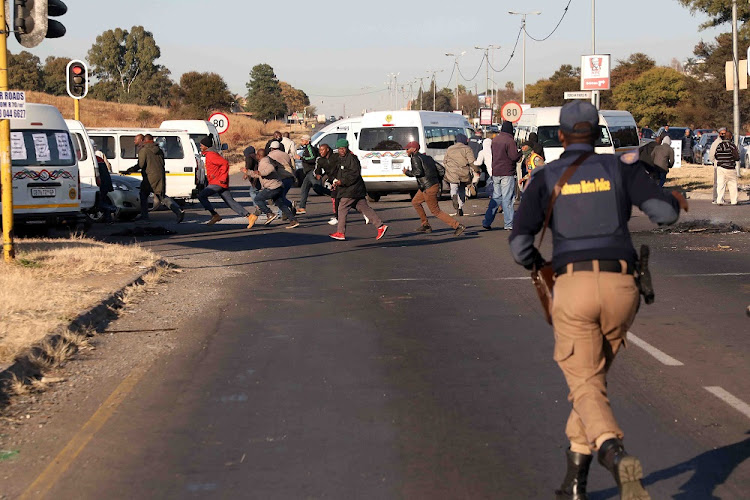 Police have been forced to use rubber bullets to disperse protesting taxi drivers who have closed the R55 in Laudium, Pretoria.

Police, backed by the army and Tshwane Metro cops had kept an eye on the R55 after taxi drivers blocked the roads using their vehicles, stopping anyone from going through. Traffic along the the R55 which connect Pretoria Central with Laudium, Centurion and Atteridgeville, had to be diverted to alternative routes in order to protect motorists from facing the wrath of angry taxi drivers who wanted no one to pass.

In the early hours of the morning, some of the commuters were able to pass at the intersection on Pierre Van Ryneveld Road but as the time went on the taxi drivers became more aggressive.

“Go back home. We don’t want anyone to pass here. No one will go through, even those on foot,” one of the drivers shouted, sending commuters on their way back. But not long after the shout, Tshwane Metro Police, Saps and member of the South African Defense Force arrived and immediately rushed the group of drivers dispersing them with rubber bullets. 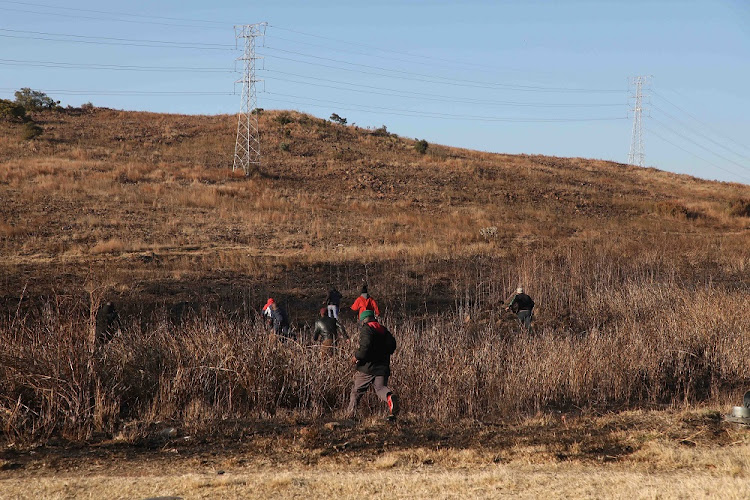 Taxi drivers running away from the police
Image: Thulani Mbele

The driver ran into an open veld. Others were able to get into their vehicles and speed off. But some of the taxis were left on the road as drivers fled fearing for their lives. A few minutes later, a group of taxi drivers came in their vehicles headed towards law enforcement. Police immediately fired rubber bullets forcing the driver to make an urgent u-turn, even colliding with each other in the rush.

Police then impounded all the vehicles that were left on the side of the road as the R55 was reopened. By 9am, commuters walked freely and traffic began to flow.

Thousands of commuters were stranded on Monday as Santaco in Gauteng embarked on a strike in protest of the relief funding announced by transport minister Fikile Mbalula last week.

Mbalula announced R1.13bn relief funding last Friday which included metered taxis and e-hailing services. Taxi bosses calculated this figure and it translated to just over R3000 for each vehicle. Mbalula described the strike as counter-productive and said there was no additional money that the taxi industry would get due to budget constraints.

A number of roads were blockaded across the province, causing traffic jams. Some of the commuters were left with no choice but walk long distances in order to reach their places of work. Santaco in Gauteng has condemned the violence displayed by some of its members.

Another stand-off is looming between the minister of transport and the taxi industry - which has rejected the conditions government has tabled for it ...
News
1 year ago

Taxi drivers running away from the police
Image: Thulani Mbele
Next Article