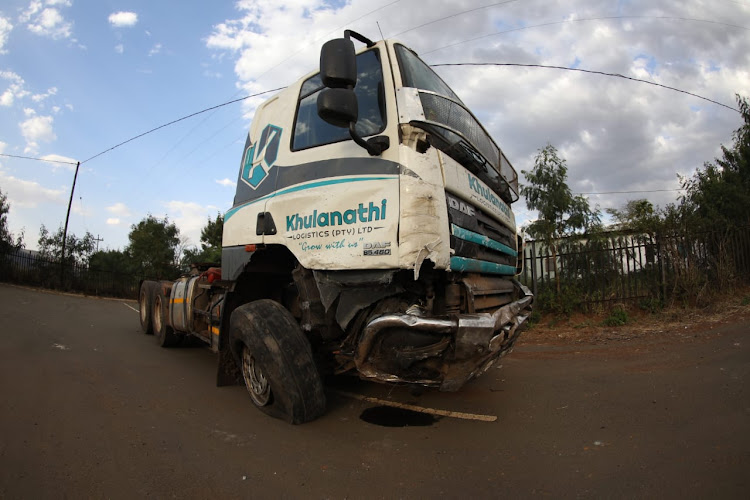 The battered remains of a truck which cut a swathe of death and devastation in Jozini, northern KwaZulu-Natal, on Wednesday.
Image: Sandile Ndlovu

A 48-year-old man who was behind the wheel of a truck that was involved in a horrific crash in Jozini in northern KwaZulu-Natal, which claimed eight lives and left 32 others injured, is set to appear in court on Friday.

Police spokesperson Capt Nqobile Gwala said the driver was expected to appear in the Ubombo magistrate's court facing charges of culpable homicide and driving while under the influence of alcohol.

The driver is being detained at Jozini police station.

In a statement on Thursday, transport minister Fikile Mbalula condemned the deaths of the eight people in an accident which he attributed to alleged alcohol abuse.

“The eight deceased lost their lives and many others were injured, after the driver of a truck carrying a load of sugar cane lost control of the vehicle. The truck hit two buses, one minibus taxi, one bakkie and one car.

“We call on all road users to exercise restraint and refrain from excessive alcohol consumption. Eight people have died and their families are now in mourning all because of the reckless behaviour of one individual. This is deplorable and simply unacceptable,” said Mbalula.

The accident sparked outrage, with many South Africans calling for the government to reinstate the ban on alcohol during level 3 of lockdown.

At least six people are believed to have been killed and several others critically injured after a truck ploughed into pedestrians in Jozini, ...
News
1 year ago

KwaZulu-Natal MEC Sipho Hlomuka has conveyed his condolences to the families of five Jozini municipal workers who died in a car accident over the ...
News
2 years ago
Next Article