The Western Cape and Northern Cape were on alert this week for a cold front, which was expected to bring heavy rain, potential flooding and snow.

Environmental scientist Simon Gear said: “Big cold fronts are expected in the middle of June. The difference in winters for Cape Town is from the number of fronts rather than how strong any individual one is.”

The Western Cape is forecast to have a wetter winter than in 2019 and the dam levels are already higher than they were this time last year, after recent rain.

“There are always two sides to flooding: the amount of rain that falls and the number of people affected. The latter is independent of the climate,” says Gear, who was the weatherman for Cape Talk and Radio 702 for 17 years.

“In Cape Town there are communities living in areas on the Cape Flats where the water does collect after rain. This flooding has been an ongoing problem,” he said. 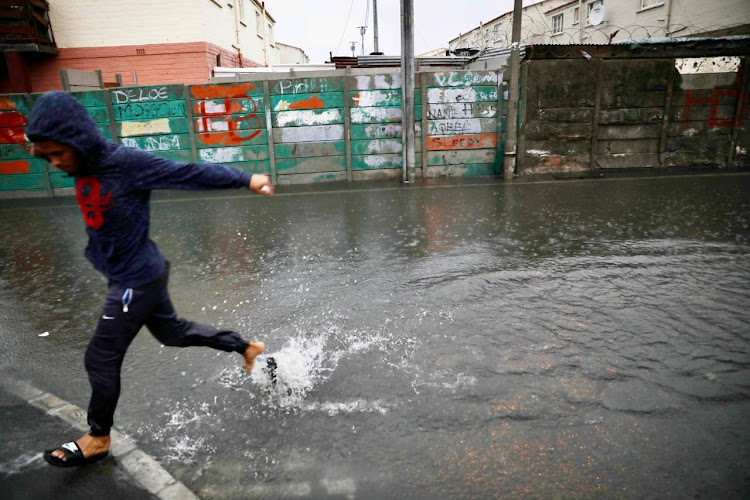 A child skips through a deep puddle on a road in Hanover Park on the Cape Flats.
Image: Esa Alexander/Sunday Times

Mncedisi Twalo, an activist for Abemi SA, which represents people in informal settlements, said he could see flooding all around him in Gugulethu after a stormy night.

“Tambo Square, Europe, KFC, Barcelona. These areas are flooded with water after rain from the early morning,” he said. “We don’t have a plan B. In the past, people could go to the community hall and be assisted, but with Covid, it is going to be very much worse.”

Heavy rainfall is expected until Thursday across the Western Cape, including Cape Town, the winelands, the Overberg and the West Coast, the SA Weather Service has warned.