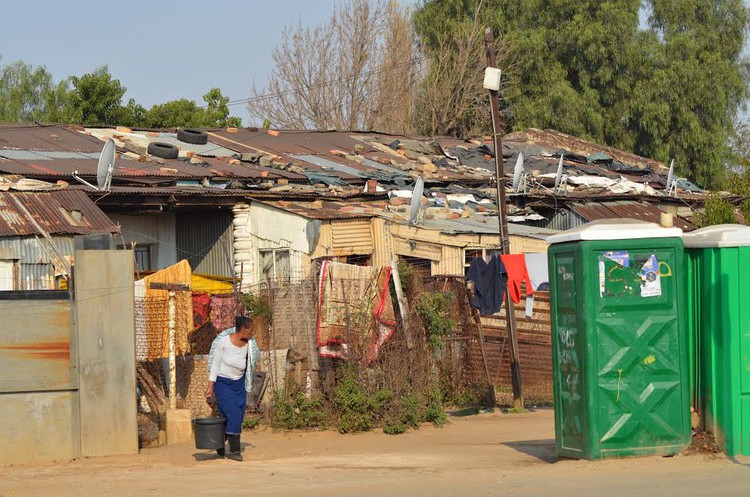 In spite of promises, the families living in Vaalkamers in Kliptown still have no decent toilets.
Image: GroundUp/Chris Gilili

“We cannot adhere to social distancing and hygiene standards in a place where 20 people share a single toilet.”

For community leader Patrick Plaatjies, the problem of the communal toilets in the informal settlement in Kliptown, where he lives, has only got worse during the Covid-19 epidemic, in spite of promises made by the authorities.

“The residents use bucket communal toilets, which sometimes go uncleaned for weeks. There are no wipes or sanitisers so we can hardly practise safety protocols,” says Plaatjies.

A stone’s throw away from the Freedom Charter Monument in Kliptown, Soweto, lives a community of desperate and forgotten individuals, in Vaalkamers, a home to just under 200 people, where there is no formal source of electricity. When GroundUp visited at the weekend, a group of young men were fixing the izinyoka (illegal electricity) connections for the neighbourhood.

Kliptown is the township where the Freedom Charter was adopted in 1955.

Some families have lived here for three generations. In June last year, GroundUp wrote about residents complaining about the poor condition of communal toilets. At the time, ward councillor Peter Rafferty (DA) acknowledged that the toilets were more than 20 years old and said: “However, we are planning to upgrade all the sanitation infrastructure in Kliptown. We will install flushing toilets with taps in the whole area.”

But a year later, there is no sign of any of this.

Diketsang Putsoane lives with her sick mother in a one-room house in Vaalkamers. She is unemployed and gets child support grants for three of her children. They survive on this and on her mother’s pension.

“We don’t know what social distancing is here in Kliptown. We all share this one house, together with four young kids. My mother is very sick so sometimes she uses a bucket that I empty into these toilets.”

She says the toilets are rarely emptied.

“You basically sit on the top of another person’s waste. There are no taps attached to the toilets.”

Her mother has been waiting for an RDP house since 1996, she says. “There is no privacy or peace because we do everything in these small rooms here.”

Plaatjies was born in and grew up in one of the crumbling one-room structures. He works as a community health-care worker around Kliptown.

“It’s very sad, to the extent that I even sacrifice from my little salary to help some families where I can. As winter approaches a lot of us will get sick from the cold because we are practically outside. These are not houses.”

“The most painful thing is knowing that we cannot do anything about this,” says Plaatjies.

Dan Matau says he is ashamed to invite people he knows to his place. “A place like Kliptown holds a very key part in our history. But instead of advancing, our lives are going backwards. It’s a shame to say you’re from Vaalkamers,” says Matau.

“The fact that we are still using bucket toilets says a lot about the way we live. Even those toilets, they are emptied only after a long time. There are no taps close to them. We don’t even have drains here. What government is saying about washing hands and keeping hygiene levels high, is an insult to us because it is not possible.”

Questioned by GroundUp, Rafferty said he was waiting for 100 new chemical toilets to be distributed throughout the area as needed.

“I have put a request for more toilets in Vaalkamers, Ngubane and Angola in Kliptown since last year. But we have a problem of resources so they take time to attend to our requests. I cannot put a time frame but I can confirm more toilets will be given to those people and it could be any time now.

“We are trying to prioritise Kliptown because it is a place of rich history and it is sad to see it the way it currently is. To this end, I met with the mayor three weeks ago to discuss how we can move fast. We were hoping to give flush toilets but that process could take even longer.”

Having diabetes or being older than 50 are far deadlier than HIV or TB in a person who contracts Covid-19, new data has revealed.
News
1 year ago

Orlando Pirates have confirmed that midfielder Ben Motshwari has fully recovered from Covid-19.
Sport
1 year ago
Next Article