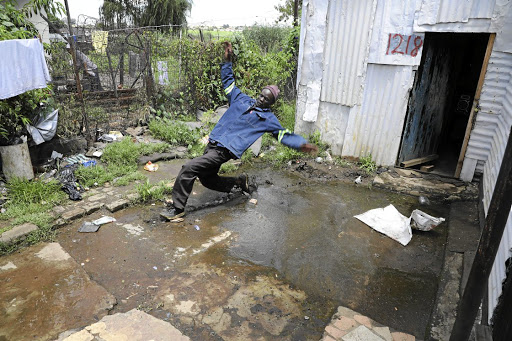 Alfred Nengovhela's property in Kliptown, Soweto, was caught by the raging storms, and was captured on camera slipping.
Image: ANTONIO MUCHAVE

The floods that hit Gauteng at the weekend have claimed the lives of three people, including an eight-year-old, who drowned during the heavy rains that began on Friday.

Head of Gauteng disaster management Elias Sithole said one of the areas that were hit hard by the floods was the Cape Town informal settlement in Soweto where over 200 people had to be relocated to the Kliptown community hall after they lost their shacks.

Sithole said two fatalities were reported in Johannesburg, where an eight-year-old drowned on Friday on the way home from school.

"A male between the ages of 30 and 35 also drowned in Douglasdale during the floods, while a woman from the West Rand was also reported to have drowned, but her body has not been found. A rescue team is still searching for her body but it has been difficult because of high water and mud in the dam where she drowned," said Sithole.

He said road flooding was reported in parts of Ekurhuleni, with no fatalities and damages reported.

At Protea South informal settlement, over 20 people were affected as water destroyed their shacks, and were forced to seek shelter with families and friends elsewhere.

Persistent and heavy rains in Pretoria and Johannesburg on Friday night and Saturday morning led to localised flooding in the two cities, and forced ...
News
1 year ago

Yesterday, Sowetan visited Alfred Nengovhela of Kliptown informal settlement who was caught on camera slipping while trying to jump out of the house from his flooded door walkway.

Nengovhela said everything was dripping wet, and wished the government could move them from the place before they drown.

He said every time there were heavy rains, he and hundreds of people in the informal settlement fell victims to the water, which destroyed their shacks and furniture.

Another resident, Melusi Ngcobo, said they felt like they were close to being statistics, killed by the floods. "The water pressure is very aggressive, and with the constant floods we no longer feel safe."

Daniel Makhoba from Union Road, also in Kliptown, said his house was flooded on Saturday morning.

"My wife and I have been working with the help of the community who helped us to drill holes on our walls to release water that was over our waists.

"Our furniture, electrical appliances and children's school books have been damaged and it's a big setback for us," Makhoba said.