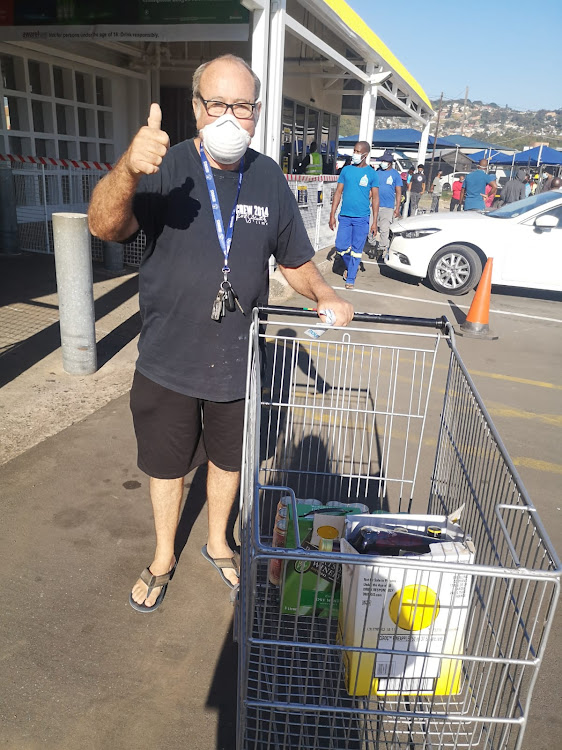 Errol Parkin was one of the first people to buy alcohol at Makro in Springfield, Durban, on Monday
Image: Suthentira Govender

Durban's thirsty residents came out in full force when liquor outlets threw open their doors for business on Monday, with some splurging up to R3,000 in savings for the occasion.

Hundreds started lining up in anticipation from about 6am.

Masked and in winter gear, they waited patiently for two to three hours before the outlets opened at 9am, in accordance with government regulations.

At Liberty Liquors in Greyville, a long queue snaked around the block  as people continued to gather through the morning.

Security was tight and many of the anxious tipplers proved hostile when photographed, turning their backs and hiding their faces.

One mused: "I think all these people are supposed to be at work and that's why they don't like the media."

Pam and Charlie White, who joined the crowd at 7.15am, said they were elated that they were allowed to buy alcohol again.

They were there to buy wine, whisky and beers.

"We are so happy the ban has been lifted," said Pam.

Another shopper, who refused to be named, said he had R,1000 to spend on whisky and beers.

"I missed my drinks so much. I'm going to get my favourite Johnnie Walker and celebrate tonight," he said.

Another shopper, who also did want to be identified, said he had not had a sip of alcohol for more than two months.

"The last time I had anything alcoholic was before the lockdown started. It's been too long. I am going to say hello to my old friends gin and whisky tonight," he joked.

Not many who queued outside the outlet observed social distancing.

A few kilometres away hundreds of people lined up outside Makro in Springfield, one of the biggest liquor outlets in the city.

​A car guard said people started arriving from about 6am.

"These people are very thirsty for alcohol."

Stringent social distancing and hygiene measure were enforced, with 50 people at a time permitted inside the store.

A restriction of 120 litres per customer was imposed.

Shopper Clinton Mthethwa said he had saved R3,000 to buy 10 cases of beer.

Asked when he planned to crack open his first beer, he replied: "Just now. As soon as I get my bottles."

Cheers could be heard when Makro opened its doors just before 9.30.

One of the first customers to complete his shopping was Errol Parkin.

"I bought wine, beers and whisky. I didn't really run low but I wanted to replenish my supplies. The government needs the money from the excise tax, so it is good thing the ban has been lifted."

"People have gone to work. I think it will get busy later," said a security guard manning a short queue outside Pick n Pay Liquor at Musgrave Centre.

People brave the cold in long queues for alcohol: 'We are thirsty'

"We are tired of drinking umqombothi, we have been very thirsty" shouted a group of patrons at the Spar Tops in Tembisa as hundreds lined up outside ...
News
1 year ago

Eager South Africans  customers at the Ferndale liquor city observed social distancing as they waited in a queue to get into the store.
News
1 year ago
Next Article