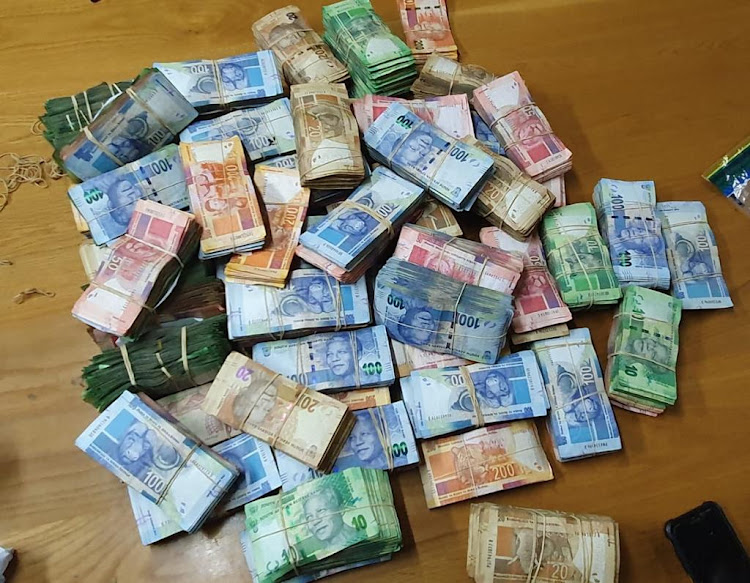 Police seized R700,000 in cash from the home of on alleged drug dealer.
Image: SAPS

KwaZulu-Natal police have arrested two men, including a controversial suspected drug kingpin, in an ongoing investigation into rival gang murders in Chatsworth, south of Durban.

In an operation with metro police on Thursday evening, a team from the provincial Organised Crime Unit raided the home of a 62-year-old male, who is well-known in the community, and seized almost R700,000 cash, gold and silver valued at R250,000, five cellphones and firearms.

"Police seized a rifle, shotgun, pistol and revolver at his home. Two of the firearms were licenced and were seized by investigators for further analysis," said SA Police Service spokesperson Brig Jay Naicker.

A second man was arrested at a flat where police suspected drugs were being stored. The flat is located opposite the home where the first arrest was made.

"Police officers seized heroin, mandrax and ecstasy valued at more than R240,000 at the flat. A 30-year-old man was arrested at the second premises after he was found in possession of the drugs," said Naicker

“This operation was the result of intelligence gathered and implicating certain individuals to be behind attacks and counter-attacks that have been taking place. A search warrant was obtained to enable police to pounce on those implicated in our investigations," said Jula.

“We have established a team within the Provincial Organised Crime Unit that is probing these cases. I wish to commend all the dedicated police officers who were involved in this latest operation. We will not allow drug dealers to operate with impunity in this province, and they will continue to feel the wrath of law enforcement.”

The two suspects are due to appear in the Chatsworth magistrate's court soon on charges of illegal possession of firearms and ammunition and drugs respectively.

Many of the lawbreakers bust at various roadblocks in Gauteng during the lockdown had liquor, drugs or unlicensed firearms, provincial police said on ...
News
1 year ago

When SA's lockdown took effect, homeless people around the country were rounded up and placed in shelters. Many of these people are drug addicts who ...
News
1 year ago
Next Article