WATCH | Police van crashes into guard and woman in Bloemfontein 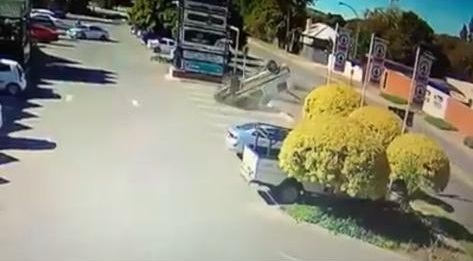 A police van crashed into two people at a shopping centre in Bloemfontein on Tuesday.
Image: Screengrab of video

Two people were injured when a police van crashed into them at a shopping centre in Bloemfontein on Tuesday afternoon, Free State police said.

Police have confirmed the authenticity of a video of the incident after it was posted on social media on Wednesday.

On arrival, a police vehicle was found “badly damaged” and a white Mahindra had damage to its front bumper.

WATCH: Two people were injured after a police van crashed into them at Bayswater shopping centre in Bloemfontein on Tuesday. Video (Supplied). @TimesLIVE pic.twitter.com/Z3WdeO1jxl

Makhele said two people were found lying next to the pavement of the parking area of the centre.

“According to eyewitnesses, apparently both were run over by the police vehicle.”

The two, a security guard from Bloemsec and a woman, were transported to hospital in stable condition.

He said the officer and the driver of the Mahindra had no visible injuries.

A case of reckless and negligent driving was opened.