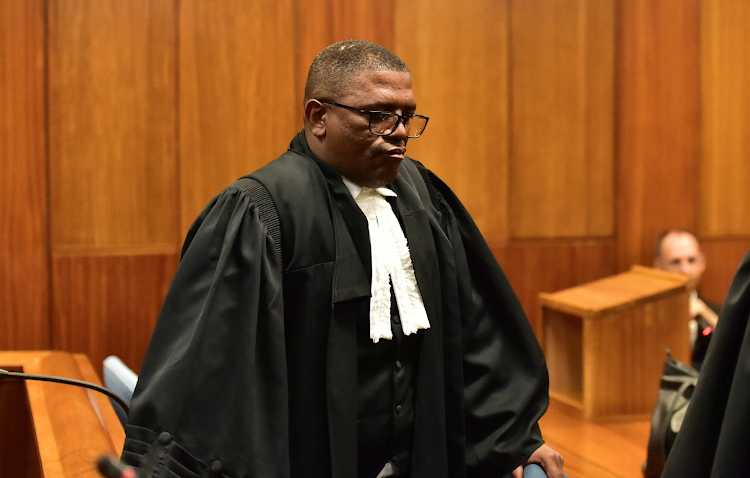 On Monday state prosecutor Ishmet Cerfontein told Port Elizabeth high court judge Irma Schoeman that her former co-prosecutor Nceba Ntelwa (pictured) would no longer be representing the state as he was no longer available to do so
Image: Eugene Coetzee

The trial of human trafficking and rape accused pastor Timothy Omotoso and his two co-accused has been hit with yet another blow after it was announced on Monday that a new state prosecutor has been appointed in the case.

It was unclear why Ntelwa will no longer be part of the prosecution team but Cerfontein told the court that another colleague had been appointed to take his place.

This follows days of legal squabbles last week between the state and defence attorney for Omotoso, Peter Daubermann, ending with both parties bringing separate applications.

At the start of the trial in February, Omotoso and his co-accused, Lusanda Sulani and Zukiswa Sitho, pleaded not guilty to 63 main and 34 alternative charges ranging from rape to sexual assault, human trafficking and racketeering.

After the testimony of two state witnesses, Andisiwe Dike and Lerato Msibi, both 30, Daubermann brought an application to have most of their evidence struck from the record or ruled inadmissible.

Daubermann accused the state of conducting an unfair trial in that evidence which came to light during court proceedings was not furnished to the defence in the form of the indictment before court, and in further particulars which the state handed over after a request from the defence to do so.

Afraid to go against the man who had complete control over her,  Andisiwe Dike could not leave pastor Timothy Omotoso’s mission house, she said on ...
News
1 year ago

During the second day of testimony by state witness Andisiwe Dike, the court heard how she and other young women recruited to stay at Omotoso’s Jesus ...
News
1 year ago

Shying away from his usual flamboyant attire, rape and human trafficking accused pastor Timothy Omotoso was wearing a new outfit when he entered the ...
News
2 years ago

Last week, Daubermann argued that it was not fair to have Omotoso, Sulani and Sitho plead to charges if the relevant information regarding those specific allegations was not available to them to properly prepare a defence.

This information included dates and places where the alleged human trafficking, rape and sexual assaults of Dike and Msibi took place.

Ntelwa then brought a counter application to amend the indictment after he told the court he was not fully aware of all the information the witnesses would testify on in court, after he had allegedly consulted with them before they took the stand.

Schoeman was expected to rule on the two applications on Monday morning but this was stalled after Cerfontein informed the court of Ntelwa’s departure from the prosecution team.

Cerfontein asked that the case be postponed to April 14 to allow the new state council to properly prepare for the matter.

A source close to the case, who is not permitted to speak to the media and as such cannot be named, said the long delay was to allow for the new state council to consult with the witnesses, and for both parties to bring any further applications.

The source said all the witnesses would need to be consulted again.

Daubermann said though his clients were not happy with the long delay, he would not oppose the application for the new council to take over from Ntelwa.

Schoeman postponed the matter to April 14 and instructed Cerfontein to ensure that Msibi would be present on the date to possibly continue to be cross-examined.