Protesters outside parliament outline their demands before Mboweni's Budget Speech 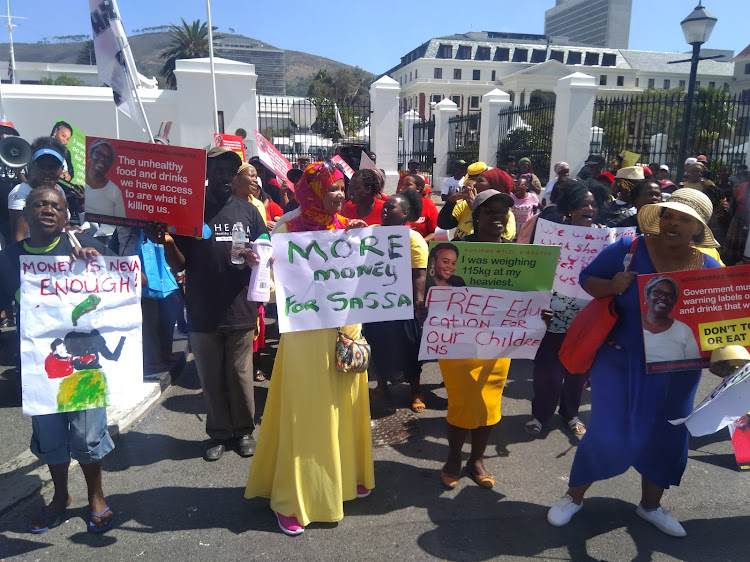 Women protesting outside parliament in South Africa ahead of the tabling of national budget speech
Image: Yoliswa Sobuwa

A group of about 50 people, mostly women, are protesting outside parliament in Cape Town ahead of the tabling of the national Budget Speech, demanding that women’s rights and free education be made a priority in Wednesday's Budget Speech.

Nomahklubi Mbayo, 34, said they are worried about the safety of their children and that there is also an increase in the number of women who are killed by their partners.

“We hope that finance minister Tito Mboweni’s budget will also focus on issues of gender-based violence and our education system. This morning, a child was killed in my area and this is a second child to be killed in Cape Town alone, not forgetting the killings in other provinces. We demand that the budget should speak to the safety of women and children in this country,” she said.

On education, Mbayo said they were worried about the poor infrastructure at township schools.

“We feel that township schools are neglected because the buildings are falling apart and we are forced to send our children to schools in town because we are worried about their safety and we want them to get better education,” she said.

Another protestor, Alive Nyakathe, 36, said the rate of unemployment is high and yet parents are expected to pay school fees.

“The finance minister better come up with a plan for schools to introduce free education. My child cannot be forced to stay at home because I can't afford to pay for her education as a parent. We send our children to universities but they drop out before completing their studies because of a situation back at home. Some children go to school on empty stomachs."