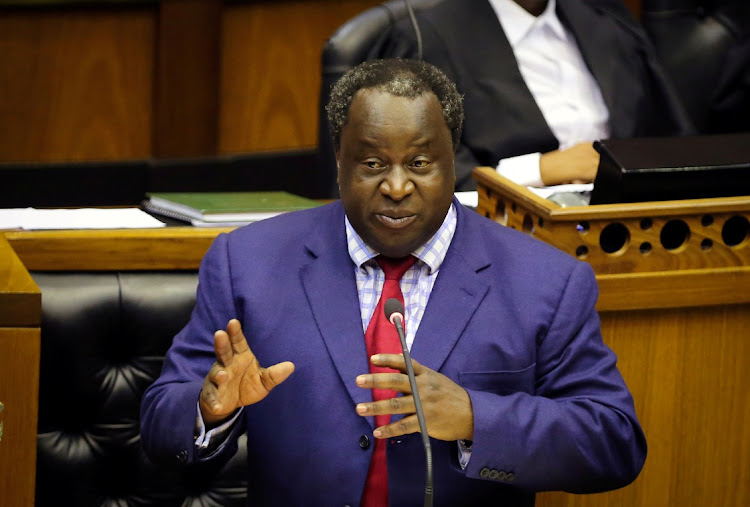 The DA said when finance minister Tito Mboweni delivers the budget on Wednesday, his only priority should be to limit further debt growth while finding ways to grow the economy.
Image: REUTERS/ SUMAYA HISHAM

The government’s escalating debt has to be restrained, and the DA says it has come up with a legal mechanism it believes will force government to look for other ways to reduce the gap between revenue and expenditure other than increasing debt levels.

BusinessLIVE reported that the party will table the Fiscal Responsibility Bill, a private member’s bill, in parliament this week. The bill is aimed at anchoring fiscal policy and is one of a suite of bills the party is proposing to fence in and better control the way the government exercises fiscal discipline, and to set boundaries and limits on its expenditure.

Another proposed bill will require transparency from the government in the granting of bailouts to state-owned enterprises (SOEs), while a third will cover how to deal with the public sector wage bill

At a media briefing on Monday to outline the DA’s proposals on the budget, which finance minister Tito Mboweni will table in parliament this week, DA finance spokesperson Geordin Hill-Lewis said the most immediate challenge facing the government was to pull back the rise in debt.

“The unrestrained expansion of public debt means more is spent on interest charges and there is less money for essential services,” he said.

The Fiscal Responsibility Bill will create a rule that will help to stabilise national debt. It prescribes that for each financial year from 2020/2021 to 2023/2024, net loan debt expressed as a percentage of GDP must not be more than it was the previous year.

What's wrong with SOEs - too many chiefs

State-owned-enterprises, or their sorry state, to be precise. That is one thing that would be upper most on everyone's mind as the head of state, ...
News
2 years ago

It provides for a review of the fiscal rule by the National Assembly every four years beginning in 2023/2024 by either amending, renewing or terminating the fiscal rule. It requires that the finance minister table an annual fiscal responsibility report at the same time as the budget is tabled, setting out whether the fiscal rules were complied with or not, together with reasons for those outcomes, and recovery plans in the event of a failure to comply with the fiscal rule.

To take account of unexpected fiscal shocks such as natural disasters, the bill provides for an exemption from the fiscal rule to be granted in respect of a specific financial year, or years, by the National Assembly on application by the finance minister.

“This kind of legislative fiscal anchor is an idea gaining currency around the world,” Hill-Lewis said.

“In its 2019 Article IV consultation report on our economy, the IMF [International Monetary Fund] cautioned that ‘authorities should establish a credible debt anchor to stabilise debt in the medium term’. Similarly, in November 2019, Moody’s Investors Services indicated it wants to see a credible fiscal strategy to contain the rise in debt in the budget."

Hill-Lewis said that on Wednesday Mboweni’s only priority should be to limit further debt growth while finding ways to grow the economy.

Hill-Lewis said around the world the idea of a fiscal rule was becoming more popular.

“A number of countries are starting to adopt this type of fiscal anchor as they understand  there has to be some kind of independent rule to rein in that incentive to spend by democratic governments.”

He said that without a fiscal anchor it is extraordinarily difficult for democratic governments to rein in their spending.

“The idea is to protect public services over time from the explosion in interest costs. Already in this year we will be spending more on interest than we do on policing, basic education and health care for the first time.”