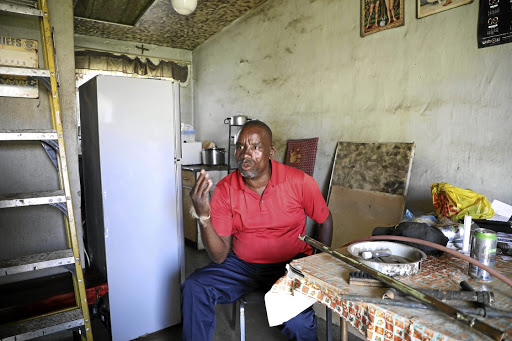 Thisha Shange, a headman at the Nancefield hostel, fears that there might be a retaliation by the hostel dwellers after their cars were set alight. / ANTONIO MUCHAVE

There are fears of violence erupting again near the Nancefield hostel in Soweto over electricity.

Five car were torched during the protest.

Thisha Shange, an induna (headman) at the hostel said the facility and its surrounding areas experienced unusual power cuts.

"We had electricity from 6am and at 9am it goes and comes back around 1pm. About 4pm we had power cuts again. These power cuts went on until the next day. People were asking what kind of load-shedding is this. We know how load-shedding works. I think the residents got angry and they took to the streets," Shange said.

But he believes criminals in the area took advantage of the protest and set alight five vehicles. Of these, two belonged to hostel dwellers. Shange said all the cars were first stripped of their engines and other parts before being set alight .

"I am deeply worried that this may turn violent. If the owners of those cars see the people who set their vehicles alight, they will not hesitate but kill them. The people that did this were criminals, you can tell with the way they pulled women out of the cars," he said.

Eskom has announced that it would be sticking to its plan to continue with scheduled power cuts until tomorrow morning.
News
1 year ago

Yesterday was the first day that Nancefield hostel and surrounding areas had uninterrupted power supply for more than five hours. But one resident, who wanted to be only identified as MaNgubane, was still left counting the costs of the outages on her butchery.

"A lot of meat went off so I had to give it to the dogs yesterday. Some of the meat that was still edible, I sold it at a lesser price for people to braai. It is a very sad situation," she said.

She then took Sowetan to the cold room where a pile of now rotten cow heads were stored. "I can't tell you how much we have lost. It runs to thousands," she said.

Soweto has been experiencing a lot of power cuts over the past few months. Some of the areas that were disconnected by Eskom have illegally reconnected themselves and vowed to fight back if power is cut off again. Eskom has previously stated that it is continuing with a campaign it started late last year in Gauteng to cut off power to users that have failed to pay or rigged illegal connections. This includes Soweto.