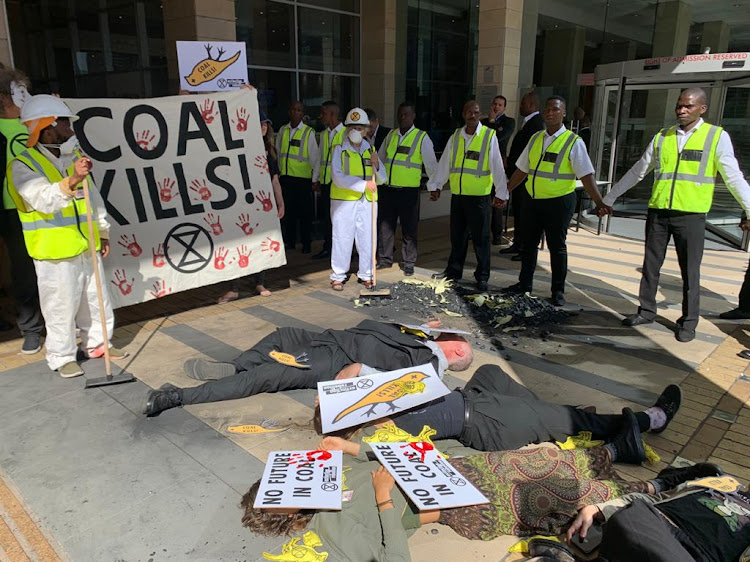 A handful of residents from one of KwaZulu-Natal’s coal-mining communities joined forces with Extinction Rebellion protesters in an attempt to disrupt the Southern African Coal Conference in Cape Town on Thursday.

Delegates from around the world arriving at the Westin Hotel were delayed at the entrance by protest organiser Peter Benjamin, who was attempting to get access to the conference.

“I was trying to enter by saying I wanted to get a massage upstairs,” Benjamin told SowetanLIVE's sister publication TimesLIVE after a dozen attempts to enter through a security checkpoint.

A scuffle broke out between security and Members of the environmental activist group Extinction Rebellion during a protest outside the Southern African Annual Coal Conference at the Westin in Cape Town @TimesLIVE pic.twitter.com/ruFfxOSf6a

Guards and police were tipped off by a news article which was published in defiance of an embargo set by Extinction Rebellion.

But that didn’t stop the rebels from staging what Benjamin calls “street theatre” by dumping buckets of coal at the entrance to the event and flopping down into the soot, pretending to have been "killed" by the effects of coal extraction and the burning of fossil fuels for energy.

The activists included people from Newcastle in KZN, who claimed that two community members were murdered recently after opposing the proposed reopening of a mine.

A new document that is meant to regulate how mining companies will in future relocate communities where mining operations are going to disrupt ...
Business
1 year ago

The protesters, said Benjamin, were transported to Cape Town with the assistance of the Heinrich Böll Foundation, an affiliate of the German Green Party.

Lucky Shabalala, an activist from Ramaphosa - the village where the two leaders were killed - said they were not consulted by the government when it came to decisions about mining.

He said they named the village to shame the president, who was the founder of Shanduka, after they were allegedly forced to move to make space for an open-cast coal mine.

“In our district of Amajuba we are having a lot of mining rights applications which are being accepted by the department of mineral resources [DMR]," said Shabalala. “DMR is the regulator, so its job is to accept those applications, but at the end of the day those mining companies should come to us as communities and talk to us about those operations which they want to do.

“They don’t talk to us, they only consult the politicians and we are the ones who suffer. We have experienced the deaths of two comrades who were shot last week because they were resisting the injustice that is going to come with mining companies,” Shabalala alleged.

Three miners died at mining operations in the Free State and North West in the past week, the Association of Mineworkers and Construction Union ...
News
1 year ago

He said the two men were opposing the reopening of a mine. “Our comrades were saying this mine will not operate here until we can talk about it,” said Shabalala.

He said they suspected pro-mining entities, including corrupt, rent-seeking state officials, were behind the murders.

“We suspect corruption. The people in charge of the municipalities used to get tenders but now they are no longer being given tenders,” he said.

“They are now turning to mining companies.”

Shabalala alleged that other community leaders had been forced into hiding after being threatened.

“My fear now is that the mine and the municipal officials have divided the community, because they have created their own committee which will run the mine,” he said.

“Then there are those like us who are crying out for environmental justice, who know that if this mining operation continues, an open-cast mine, the dust will flow straight into our communities. We don’t have assurances that the mine will control the dust.

“We are in a drought crisis at the moment, the water will be contaminated by the dust from the mine.”

Shabalala and other activists were not convinced by promises of community development and jobs.

“We know very well what happens, we have a lot of mining companies in Newcastle. Those mining companies come with their own people from all over the world. When it’s time to employ our own people, they say, 'you guys don’t have skills'. That’s why we reject it,” he said.

If mining companies were serious about development, they would approach the communities and ask what that development would entail.

Shabalala said their communities thrived on agriculture, but as soon as coal was found, laws kicked in to remove the communities in favour of the mines.

The activists also called for minister of mineral resources and energy, Gwede Mantashe, to reprioritise SA’s energy mix to favour renewable sources such as wind and solar.

“We want the minister to understand that mining is not the solution to poverty in SA. Mining is the killer, especially coal,” she said.

“Go to Johannesburg where I come from. We have so many mine dumps that are not being rehabilitated and those mine dumps are giving us silicosis and asthma.

According to the World Coal Association website, SA is the seventh-largest coal producer, mining 259-million tons in 2018.

The 15th Southern African Coal Conference will continue on Friday and among the topics of discussion will be SA’s Integrated Resource Plan (IRP) and “how new technologies could prolong coal’s dominance for decades to come”.

According to the latest draft of the IRP, SA is expected to have moved 25% of the power grid over to wind and solar by 2030, with fossil fuels expected to contribute 60%.