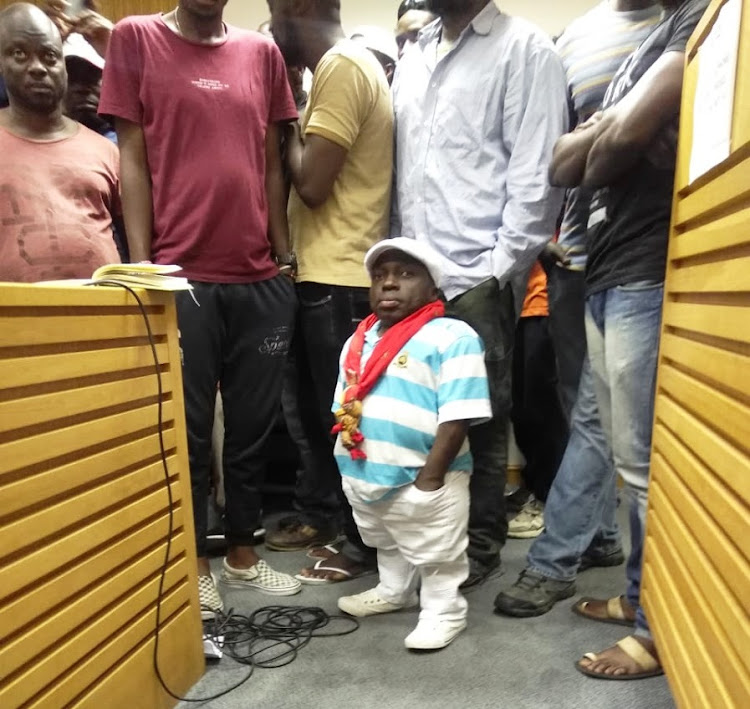 The leader of a splinter refugee group, Papy Sukami, arrived at the high court in Cape Town with bodyguards on 28 January 2020.
Image: Philani Nombembe

The city of Cape Town will know in three weeks if it can enforce its own bylaws against a group of refugees camped on pavements in the city centre.

Refugees, the city and the department of home affairs butted heads in the high court in Cape Town on Tuesday.

The bone of contention is the crowd of people who have been cooking and sleeping on the pavement outside the Central Methodist Church on Greenmarket Square for three months.

According to the city council, this contravenes its bylaws. The city said it had been inundated with complaints from businesses and hotels in the area about people fighting and urinating in public.

The city also hauled home affairs to court to compel it to verify the status of the people living on the streets.

The group was evicted from outside the offices of the UN High Commission for Refugees in the CBD in October. The refugees were demanding transfer to a third country, saying they did not feel safe in SA.

They were offered refuge in the Methodist church but when they clashed over donations and  leadership a splinter group set up home outside.

The group that remained in the church is under the leadership of Jean-Pierre Balous,  while the one on the pavements is loyal to Papy Sukami.

Counsel for the city, Con Joubert, told the court  the “application is aimed at enforcing the city’s bylaws which prevent "people sleeping and cooking on the street". He said it was "not about an eviction order”. 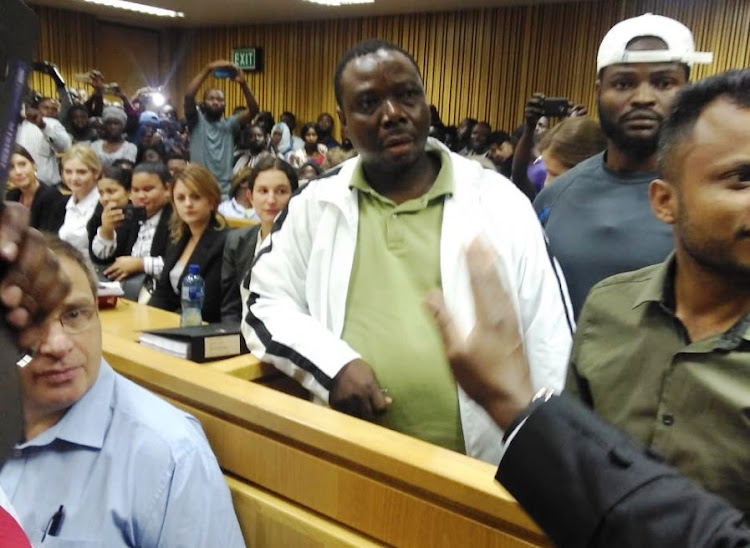 He told acting judge Daniel Thulare: “Your lordship should have seen numerous e-mails from the hotels, complaints of drinking, fighting, defecating [and] urinating [in public].”

Greenmarket Square traders were also complaining about the refugees.

“At the end of the day they go home, they don’t take over Greenmarket Square.  The case we are bringing against the protesters is straightforward.”

Joubert said the refugees were aggressive towards city officials and had prevented them from doing their jobs.

“There have been three occasions when the city has sought to get the names of the people but they were harassed and couldn’t do their work,” said Joubert.

“One of the senior city officials was quickly surrounded by protesters and harassed. That cannot happen, my lord. We must show that the court is dealing with people who have contravened the city’s bylaws and laws of the country. They have taken an aggressive stance.” 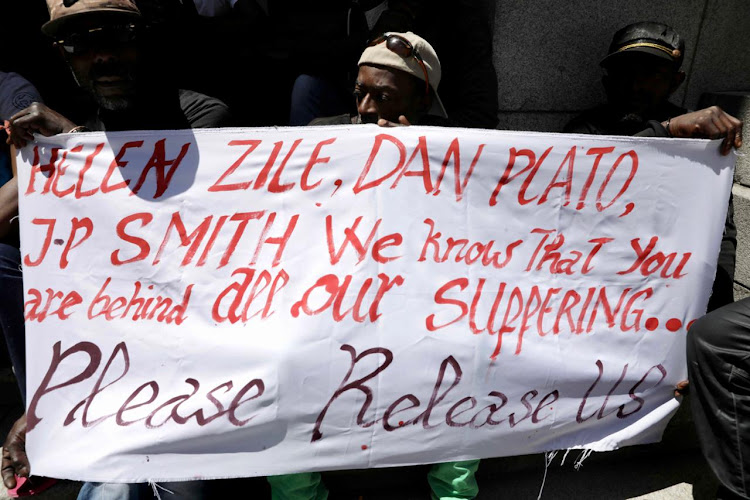 Refugees demonstrate outside the Cape Town high court on January 28 2020. They are demanding help to move to another country.
Image: Esa Alexander

Joubert said the refugees had rejected food from the Gift of the Givers.

“They turned it away. Their answer was that the charity had disrespected their leadership. We don’t know who their leaders are. This emphasises the stance that has been taken.”

The city had no intention of providing the refugees with emergency accommodation as they were not homeless, said Joubert.

The refugees chose not to appoint a lawyer and Balous represented them. He was incoherent and accused various NGOs of money-laundering and racism.

Balous said: “There is no one who intimidates people at Greenmarket Square – inside and outside the church. The SA Human Rights Commissioner [Chris Nissen] is the one who brought the differences.

"I can tell you, the city came with an attitude. This is four months already and people have no work. The city has the tendency of rubbishing other departments. They always shift the blame and make it as if city is heaven.”

Balous said the refugees were within their rights to reject help from the Gift of the Givers.

The City of Cape Town sent two minibuses to Greenmarket Square on Monday to return refugees to where they lived before settling at the Central ...
News
1 year ago

"We have even asked parliament to investigate organisations like Scalabrini [a centre which helps migrants, refugees and asylum-seekers]. They are eating money, they are laundering money. I am sorry I have to say this: if it is black (organisations) they are treated with suspicion, and if they are white it’s okay.”

Counsel for home affairs, Seth Nthai, said the department was surprised the city had taken it to court. He said of about 500 refugees inside and outside the church, only 68 were not documented. He said the bylaw contraventions were the city’s problem.

“In this case there is almost a tendency to shift the blame to the department,” said Nthai. “But is it true that the home affairs minister was playing violin when the fire was burning?

"In any event, that problem is in the city and has nothing to do with [the department]. The protesters never said they are protesting because they want to be verified by the department of home affairs. They want the UN to relocate them outside South Africa.”

Nthai said the department had written to Balous to discuss the issue of verification of refugees, but he gave officials the same treatment he gave to the city. He described the court action as unnecessary and based on confusion.

Balous responded: ‘We don’t want anything to do with you. It will be a waste of time. You have made up your mind. You want to destroy our children.' ”

Judgment will be delivered on February 17.

The reverend who runs the Central Methodist Mission on Cape Town’s Greenmarket Square has condemned the “fallout between the refugee leadership” at ...
News
1 year ago

A leader of a splinter refugee group, who is facing robbery and assault charges, was granted R2 000 bail on Thursday
News
1 year ago
Next Article