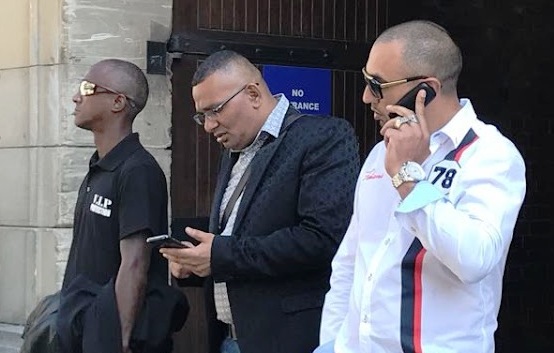 Colin Booysen, centre, and Nafiz Modack, right, after a previous appearance at Cape Town magistrate's court. They are accused of trying to extort a 'security' payment from a Cape Town business.
Image: Hannah Green

A group of alleged underworld figures led by Colin Booysen and Nafiz Modack asked the Cape Town regional court to throw out an extortion case against them on Tuesday.

Although prosecutor Mervin Menigo suggested only one of the accused, Ashley Fields, should be cleared on some counts, he stuck to his guns on the main charge of extortion against Modack, Booysen and Jacques Cronje.

The four men's lawyers said the state had too little evidence to prove their clients extorted Grand Africa Cafe and Beach at the V&A Waterfront.

They are said to have demanded R90,000 for security in November 2017, hours before a major event.

Menigo said two witnesses, Grand Africa's ex-manager Radley Dijkers and former Harbour House Group employee Stewart Bailey, were under the impression their party would be disrupted and their business affected if they did not pay.

Cronje's lawyer, Edwin Grobler, objected to the state's use of "outside evidence", such as media publications, as a basis for the witnesses' fear of the accused.

He was referring to the state's submission that the witnesses felt intimidated by the presence of the accused on the day in question due to what they had read in the media about hostile takeovers of Cape Town nightclub security.

Menigo admitted that while there was no explicit threat, the presence of the men and their words implied that bad things would befall the business if they withheld the payment, which they saw as a tax.

A corruption case against alleged Cape Town underworld figure Nafiz Modack and his mother, Ruwaida, has been postponed to January 28
News
2 years ago

He pointed out that none of the men had a clear connection to TSG, the security company which had been providing the Grand with security for seven months, and said they had no right to make demands for money on behalf of TSG.

Menigo quoted undisputed evidence that Modack told Dijkers they needed at least 80 guards for the size of the event they were going to run and that this would cost R130,000.

"If that's not security advice, I don't know what is," he said, referring to a charge that the men offered advice when they were not registered security providers.

Modack's counsel, Dirk Uys, conceded that his client "furnished advice" as a consultant for TSG but said he was not an employee and that he derived no benefit from the deal.

"The court must draw its own conclusion from the evidence. It is clear that [Modack] was there to get an increase. He must have been doing it for TSG. He wasn't doing it for any other single purpose," said Uys.

But despite paying R90,000 to a now-deceased fifth accused in the matter, Carl Lakay - the only TSG employee among the group who met Dijkers - Grand Africa did not receive more  guards and had to rely on the 15 agreed to with TSG director Grant Veroni.

The defence pointed out that Dijkers and Bailey were sanctioned by Harbour House Group to negotiate with Modack and the other accused and that the business's contract with TSG continued for almost a year after the suspects were arrested in December 2017.

They also pointed out that the complainants testified before the court that they were satisfied with TSG's services.

Menigo dismissed the defence allegation that the case against the accused was a part of a police conspiracy with alleged underworld figure Mark Lifman to stop the men muscling in on his nightclub security business.

He said the fact that Capt Anthea Jaftha and her team from the police anti-gang unit were given branded jackets in exchange for protecting the facility during a company function "was embarrassing for the SAPS" but there was no ulterior motive.

Jaftha and her team were also at Lifman's house in Sea Point when Bailey visited him to discuss what he believed was a hostile takeover of the Grand's security.

Menigo said the absence of an original statement from Jaftha, who launched the extortion investigation, was "not typical" of someone whose motive it was to destroy the suspects.

He pointed out that the witnesses even attempted to hide evidence from the police when they created an invoice for the R90,000 nearly a week later.

Bruce Hendricks, representing Fields and Booysen, said the police officers' meeting with  Lifman, the gift of jackets for security and Jaftha's conduct were reason enough for the court to find there was undue influence from a third party.

Judgement on the acquittal application is expected on February 20.

Alleged underworld boss Nafiz Modack alleged collusion between his rival, Mark Lifman, and the state’s main witness in an extortion case on Wednesday.
News
2 years ago

Alleged underworld figure André Naudé says he was targeted in an attempted hit in Durbanville, Cape Town, in the early hours of Sunday morning.
News
2 years ago
Next Article