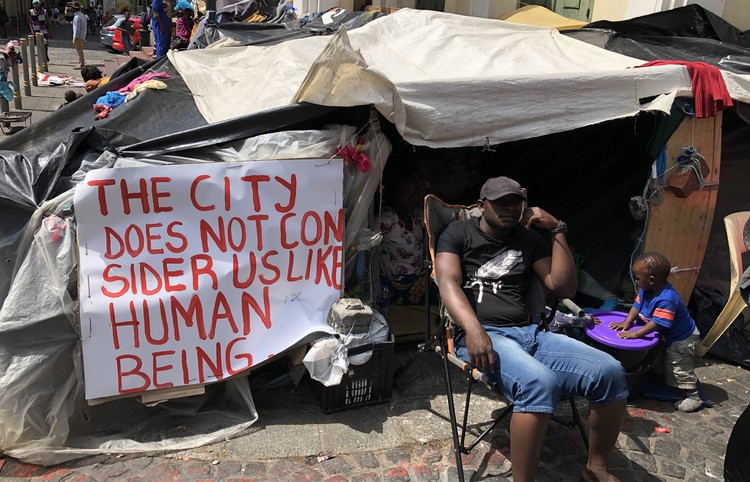 Refugees living inside and outside the Central Methodist Church on Greenmarket Square rejected the City of Cape Town’s offer of “voluntary reintegration” on Monday.

The city sent two minibuses to Greenmarket Square to return the refugees to the communities where they had lived. However, the refugees refused the offer, saying that they don’t want to be reintegrated and will wait for a decision in the Cape high court on Tuesday.

The city sought a court order in December to prevent the refugees from flouting by-laws and disrupting business for the traders in Greenmarket Square. The court is due back on Tuesday when, according to Richard Bosman, executive director for safety and security for the City of Cape Town, the city hopes to obtain a final order to enforce its by-laws.

Whether this will give the city the authority to remove the refugees is not entirely clear.

SA’s new rules governing asylum seekers and refugees could easily have been drafted by the Trump administration, says Sharon Ekambaram of Lawyers for ...
News
2 years ago

On Monday, the city’s director of law enforcement, Petrus Roberts, tried to address a group of refugees about transport being provided for reintegration. Some of the refugees became agitated and interrupted his speech, chanting: “No more South Africa. No more xenophobia.”

Aline Bukuru, one of the refugee leaders, told GroundUp that the refugees had not camped out for four months only to be sent back to the communities that they were trying to escape. She said they had received no details from the city about the reintegration, “only rumours”.

However, Bosman said the offer of voluntary reintegration was “supported by relevant government agencies (home affairs, the police, the city and the UNHCR) and was communicated accordingly among the agencies as well as the refugees”.

Crispin Mongwe, a spokesperson for the refugee, told GroundUp that law enforcement officers told the refugees last week they would have the opportunity to leave on Monday if they filled out forms and volunteered to be taken by bus. But Mongwe said that “we have decided to wait for the court day”.

The refugees had been protesting outside the UNHCR offices on St George's Mall. They were removed on October 30 and regrouped at the church. But because the church is so full, many have been living outside on Longmarket Street.

The reverend who runs the Central Methodist Mission on Cape Town’s Greenmarket Square has condemned the “fallout between the refugee leadership” at ...
News
2 years ago
Next Article