A leader of splinter refugee group, who is facing robbery and assault charges, was granted R2,000 bail on Thursday.

Congolese Papy Sukami, 44, was arrested on Friday when tensions among the refugees living in the Central Methodist Church in Cape Town escalated over leadership roles and distribution of donations, including money, food and clothing.

According to the charge sheet, Sukami allegedly assaulted Serge Shauba in the Cape Town CBD in October 2019 and robbed him of an iPhone 6, a Canon camera, a wallet, R2,000, cards, a watch and shoes.

On Thursday, the state asked the Cape Town magistrate’s court to set Sukami’s bail at R3,000. But his lawyer, Ian Murray, convinced the court to set it at R2,000.

Among his bail conditions, Sukami is not allowed to enter the Cape Town CBD without the investigating officer’s permission.

Throngs of his faction shouted and danced as Sukami emerged from court. He got into a waiting car and was whisked away.

Murray said outside court that Sukami had an “address in Table View” and that “I am told it’s a beautiful place”. He said Sukami denies the charges against him. 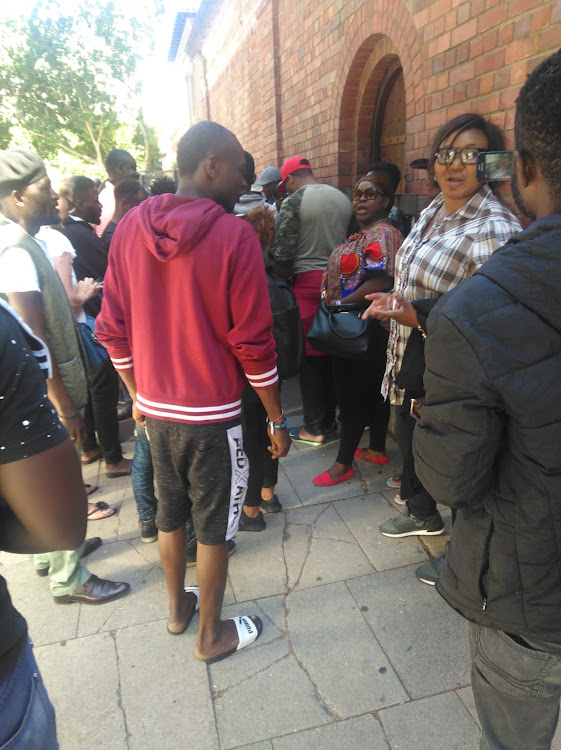 “He is going to be pleading not guilty,” said Murray. “Under the circumstances, I don’t think he committed the crimes he is accused of. This seems to have political undertones, both local and internationally.”

Sukami’s matter was postponed to March 13. “It’s a final postponement for police to complete their investigation, otherwise the case will be thrown out,” said Murray.

He said Sukami was not shaken by incarceration.

“He seems to be doing very well. He has been around for a while. He had acted in movies. There is one where he was a stuntman and they had to set him on fire and he rolled on the ground. But I don’t have that video with me.”

Tensions flared last week at the church, where about 800 refugees have been living since they were evicted from outside the UNHCR offices in the CBD three months ago.

Sukami and rival faction leader Jean-Pierre Balous, 38, accused each other of misleading the refugees.

Sukami accused Balous of pocketing R160,000 he had raised through crowdfunding and doling out other donations to his inner group. Balous dismissed Sukami as power-hungry and said he was being supported by former army generals.

Sukami and his followers were kicked out of the church as a result of the tensions.

Balous is due back in court on Friday for allegedly assaulting fellow refugees at the church. He is “charged with eight cases of assault, five of which were assault with intention to do grievous bodily harm”, police said.

The City of Cape Town says it will soon begin “enforcement operations” against the group of refugees camping outside the Central Methodist Church in ...
News
1 year ago

One of the leaders of a splinter refugee group living in the Central Methodist Church in Cape Town appeared in court on robbery charges on Monday.
News
1 year ago
Next Article