'We're missing out on school, can we please be admitted?' 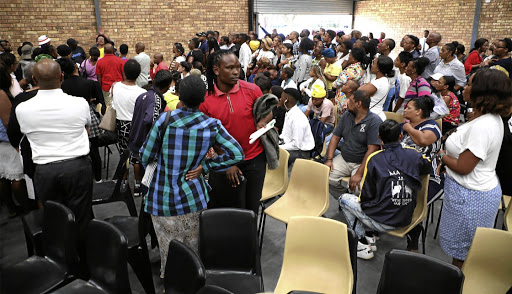 A group of pupils and parents frustrated by the online registration system and not being placed at school.
Image: ANTONIO MUCHAVE

"We want to learn and we are missing out on school, can we please be placed at school?"

This is Monde Jambela's desperate plea to be placed in a school so that he can start his grade 8 like other pupils in Gauteng. Yesterday, Monde joined a group of frustrated parents and pupils at education district offices in Ridgeway, southern Johannesburg.

For the past two weeks, he had been going to the district offices with the hope that he will finally be placed.

"My mother applied using the online system in March last year. Since then nothing has happened and it really hurts me to see other pupils going to school. I am forced to sit around and watch TV the whole day. All I want is to go to school," Jambela said.

Kamogelo Nxumalo, 13, who is also supposed to start grade 8, said she is worried that she will start school after March. "We should not be fighting for education, it is our right to go to school," she said.

Another pupil, Tshepiso Mokgatle, 16, said she had just moved to Ridgeway and she was struggling to get a school.

"I am supposed to start grade 11 but I am going up and down looking for a school. For me not to be left out in my school work, I watch a school show on TV," she said.

The MEC for education in KwaZulu-Natal, Kwazi Mshengu, has instructed all district and circuit offices in the province to remain open on Saturday to ...
News
2 years ago

Parents could not hide their anger as they felt the department was not taking them seriously. Molefe Lebona, a parent, said he applied at four schools last year which are just 100m away from his place.

"My child has not been accepted at all those schools. They are now telling us that Forest High School is the only school that is available.

"I am not comfortable with taking my child there, especially after the reports of pupils killing each other in that school," Lebona said.

"The officials helping us here are very rude. One lady said to me there was no space and what should she do. That is not a way to speak to people. It's not like we just walked in here and asked them for a favour, I applied on time and I never got a response," he said.

The first day of late online applications went well with more than 10 000 pupils successfully placed at various schools. On Wednesday evening the ...
News
2 years ago
Next Article