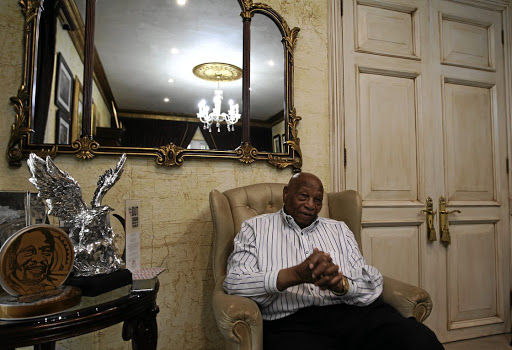 The business legend was born on December 24, at Lenyenye in what is now Limpopo province.

He trained as a teacher before starting small grocery stores in Soweto in the early 1950s, which led to various businesses including a butchery, liquor stores and supermarket, car dealership and filling station. The most visible sign of his success is his 65,000m² Maponya Mall in Soweto. In 2007, former president Nelson Mandela cut the ribbon at the opening of the landmark township development.

Let me take this opportunity to wish Ntate Richard Maponya a happy 99th birthday. I urge young South Africans to research the life story of this great legend, and draw lessons from how he overcame adversity to become one of the greatest pioneers and success stories of our time. pic.twitter.com/ZgVpmGAuHL

Maponya was the founding president of the National African Federated Chamber of Commerce and Industry (Nafcoc), which was started in 1964 to serve the interests of small businesses.

He is driven by the country's need for more entrepreneurs.

“Why should I retire? We need to create jobs for our people. That is my primary objective,” he said at the age of 82. “I have been blessed beyond measure and am able to put food on the table; I want the same for others.”

The driven tycoon, speaking at the launch of the Dr Richard Maponya Institute at the University of Johannesburg when he was 87, reiterated this sentiment, saying: “I actually mean it when I say I am not going to retire.”

“The only time when I am going to retire is when you are going to be saying to me ‘lala kahle’, rest in peace’. That is going to be my biggest retirement.”

In recent years, he set up the Maponya Institute to educate young people to start and run their own businesses. And in October this year, he said he was looking for financing to launch an academy to address the low employment rate in the country.

He encouraged unemployed youth to become more proactive. In a previous Sunday Times interview, he spoke wistfully of his generation's “do-it-yourself” attitude. “Our youngsters are growing up with the idea of having everything for free. It’s an entitlement attitude. That sense of entitlement has killed the initiative of our youngsters.”

Richard Maponya, the great-grandfather of black business, is not ready to rest on his laurels despite being two years short of a century.
Business
2 years ago

Entrepreneur and property developer Richard Maponya had Twitter users gushing over how strong he looks at 98 after he was spotted walking unaided at ...
News
2 years ago
Next Article