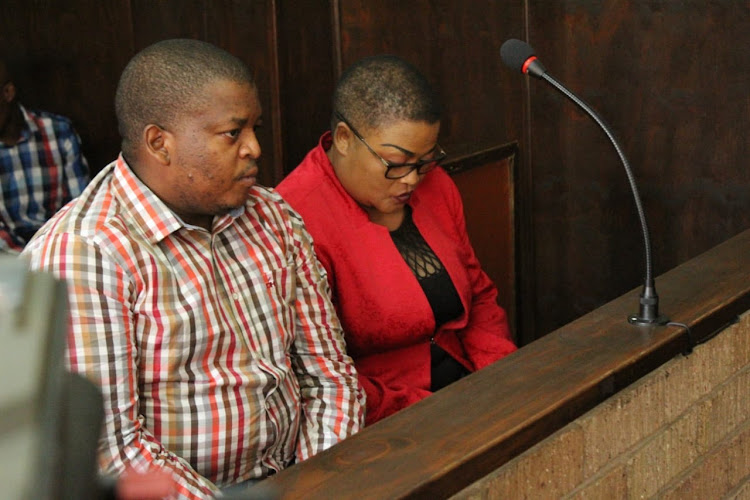 The former Mpumalanga Master of the Court Bina Masuku and her boyfriend, Elvis Kgosiemang are facing charges of fraud, corruption and money laundering at the Nelspruit magistrates court.
Image: Mandla Khoza

The bail application of former Mpumalanga master of the high court Bina Masuku and her boyfriend has been postponed.

Masuku (44), and her 35-year-old boyfriend Elvis Kgosiemang have been accused of defrauding public members by pocketing money from deceased people’s estates. She was taken into custody on Thursday while Kgosiemang was arrested on Friday.

Masuku has since been dismissed from the department of justice on November 8 after an internal investigation found she had misrepresented the department.

The two are facing charges of fraud, corruption and money laundering.

Masuku is also facing a charge of contravention of the immigration's act after the department of home affairs found she had gotten her South African ID book fraudulently.

The spokesperson of the Hawks in Mpumalanga captain Dineo Sekgotodi told the SowetanLIVE that Masuku would handle cases of public members on their deceased’s persons estates and refer them to Kgosiemang, who posed as a lawyer.

“We also found out that accused number two (Kgosiemang) had no documents proving he was a lawyer. He used a family trust to deposit some of the monies taken from deceased people’s estates,” Said Sekgotodi.

The state prosecutor told the court that Masuku applied for her ID book in August 1994, using false information.

The bail application was postponed to November 21 and 22 while the state finds witnesses including those that have been defrauded, in the interim.

A 44-year-old senior official attached to the department of justice was arrested on Friday following investigations into corruption and fraud at the ...
News
2 years ago

The criminal trial of alleged ponzi scheme masterminds Yunus Moolla and his wife Fathima Carawan finally got under way on Tuesday.
News
2 years ago
Next Article