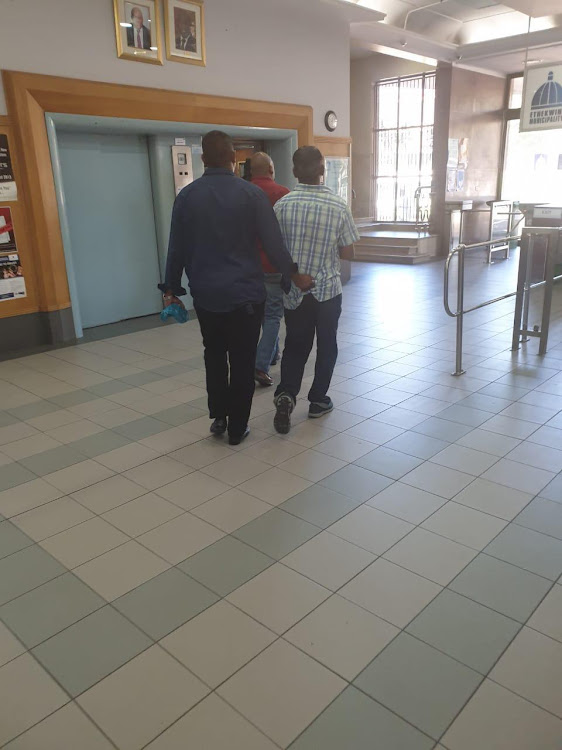 Sudesh Beethraj was escorted out of the eThekwini municipal offices on Friday by members of the Hawks. He was arrested on charges of corruption after an undercover operation in which he solicited a bribe.
Image: Supplied

A 49-year-old senior eThekwini municipality official was arrested on Friday for soliciting a bribe.

The arrest came during an undercover Hawks operation.

Sudesh Beethraj, a senior team leader in the building inspector section at the municipality's development, planning, environment and management department, appeared in the Durban magistrate's court on Monday.

"Members received a complaint that the suspect allegedly demanded cash in order to facilitate the approval of the complainant’s building plan. An undercover operation was conducted and he was arrested after accepting a bribe. He was then placed under arrest and charged with corruption," said Mhlongo.

A source within the municipality said Beethraj's arrest would have serious implications for the city.

"All the plans he’s approved should surely be brought into question, especially if the sites have already been problematic or approved in seven days," the source said.

Municipal spokesperson Msawakhe Mayisela said the municipality would co-operate with all the institutions tasked with dispensing justice.

"In no circumstance will we find ourselves standing in their way as they discharge their constitutional responsibility. We are not going to change from that position. We are a municipality that is  subscribing to the rule of law, and where we are required to operate with our law enforcement agencies we will do so without any problem," he said.

DA eThekwini caucus leader Nicole Graham said it was about time action was taken by the authorities regarding the department in question.

"We have for a very long time been receiving allegations and have been requesting investigation. Last year we received 150 detailed complaints from members of the public which we submitted to the city management to request an investigation."

Graham said Beethraj's arrest was only the tip of the iceberg and while they were looking forward to more arrests, the need for the city to also act was crucial.

"The city can't just depend on the Hawks when corruption is rife within its own departments. It is now time for the city to do its own internal investigations into how these departments got to be the way they are," she said.

Beethraj was granted bail of R8,000 and the matter was postponed to November 26.

The Hawks' investigations into the mass looting of the VBS Mutual Bank is at a "critical stage", with arrests imminent.
News
2 years ago

The seizure of properties, luxury cars and cash believed to be the proceeds of crime was in relation to Gumede's multimillion-rand fraud and ...
News
2 years ago
Next Article