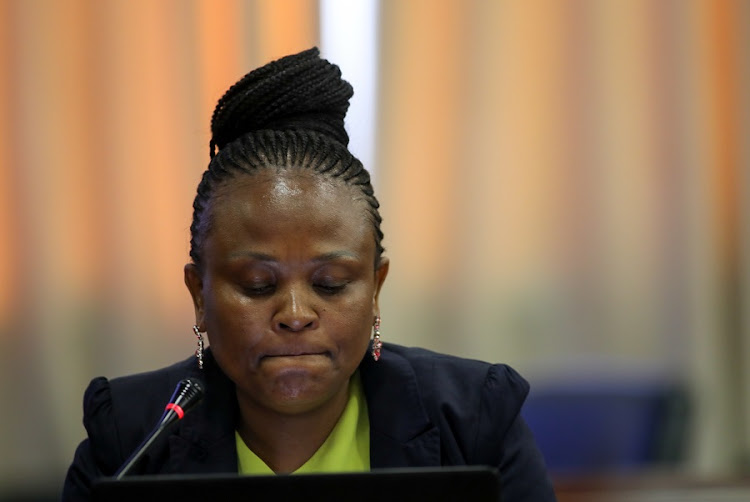 Public protector Busisiwe Mkhwebane said she was concerned that donations to the president's CR17 campaign 'created a situation of the risk of some sort of state capture by those donating such large sums'. File photo.
Image: ESA ALEXANDER

Public protector Busisiwe Mkhwebane has expressed concern that donations made to President Cyril Ramaphosa’s CR17 campaign created a “risk of state capture” by those who contributed millions to his bid to become ANC leader.

In court papers filed in the North Gauteng High Court this week, Mkhwebane dared Ramaphosa to prove how the ANC benefited from donations made to his campaign, again insisting that the more than R200m raised was for his personal gain.

“I am surprised that the president, who has sought to shine the light in the path of what he calls 'renewal' and a 'new dawn' for the country, needs persuasion that such transactions for the benefit of a person occupying the position of deputy president of the republic should concern him and may constitute a violation of section 96 of the constitution,” she said.

Mkhwebane stuck to her guns in relation to e-mails which put Ramaphosa at the centre of fundraising for the CR17 campaign.

The e-mails contradict Ramaphosa's claim that he had no knowledge about campaign funding affairs.

In her affidavit, Mkhwebane slammed Ramaphosa’s conduct as “constitutionally questionable” and accused him of not being transparent.

Former president Jacob Zuma has entered the battle between the public protector and South African Revenue Service (Sars) over his tax ...
News
2 years ago

Mkhwebane was responding to Ramaphosa’s court application to have her Bosasa report reviewed, declared invalid and set aside.

Her affidavit, filed on Thursday, showed a militant Mkhwebane, relentless in her fightback.

This is despite her facing other legal battles this week. One battle is with her former chief operating officer, Basani Baloyi, who accused Mkhwebane of playing politics, and the second with the national Sars commissioner Edward Kieswetter over former president Jacob Zuma’s tax records.

Mkhwebane told the court the “huge transactions” to the CR17 bank accounts concerned her. She said she was also concerned with the manner in which the transactions were conducted.

“I was further concerned that these sums of money, claimed to be 'donations', created a situation of the risk of some sort of state capture by those donating such large sums of the money,” she said, adding that there was compelling evidence to suspect money laundering.

Ramaphosa approached the North Gauteng High Court in August, arguing that Mkhwebane got so much wrong in her report implicating him that she even miscalculated the amounts paid into the accounts of the CR17 campaign - and even “double-counted the same amounts in some instances”.

Ramaphosa lashed out at Mkhwebane, saying the way she approached her investigation into whether he misled parliament was “unfortunate and leaves a lot to be desired”.

He said Mkhwebane acted irrationally, got the law wrong and acted out of her jurisdiction.

Mkhwebane insisted Ramaphosa was being technical to avoid taking responsibility.

“None of these contentions are borne by the facts of this investigation at all. They are all an attempt to obfuscate the matter, to take irrelevant technical points merely to duck the real issues and avoid accountability,” she has since told the court.

Mkhwebane told the court the evidence contradicted Ramaphosa’s claim that he was not involved in the solicitation of donations, and that he did not personally benefit.

“It is telling that instead of denying the contents of the email, the president complains about how I obtained the email to which I refer. I receive many documents from anonymous whistle-blowers. These emails were provided to my office anonymously and in hard copies,” she said, denying Ramaphosa’s assertion that she obtained them unlawfully.

Mkhwebane further hit back at Ramaphosa’s claim that she relied on information obtained unlawfully, saying he "offers no evidence whatsoever for this serious accusation".

She wants the court to dismiss Ramaphosa’s case.

The North Gauteng high court has dismissed an application by former Western Cape premier Helen Zille to have the report by public protector Busisiwe ...
News
2 years ago
Next Article