'You are given no choice': parents vent over admissions to Gauteng schools 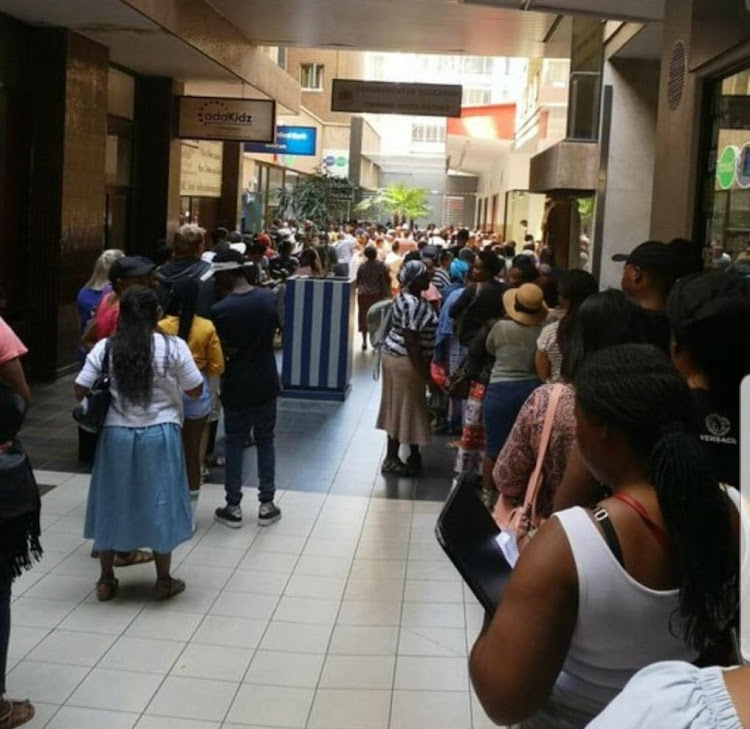 Queues at one of the Gauteng education department district offices. A petition to scrap the online applications system has been launched.
Image: ChefKat-Molefe/Twitter

The backlash over pupils who are still unplaced at schools in Gauteng for the 2020 academic year continued on Monday with angry parents lashing out at the education department.

Irate parents took to social media to vent their anger while some signed an online petition calling for the scrapping of the department's online applications system.

Gauteng Education MEC Panyaza Lesufi was scheduled to update parents on the latest developments at 2pm in Johannesburg on Monday.

There were chaotic scenes on Sunday as parents queued at district offices after being alerted by SMS that they were open to deal with the backlog of pupils in grade 1 and 8 who are still unplaced in the province.

A petition posted on change.org by Cheri-Lee White on Sunday titled, “Cancel Gauteng department of education online admission system”, said parents had been left “disappointed and stressed out” by the process.

The fact that it is an online system and crowds still have to gather at department doors means that the online factor of this project has failed. We cannot be nursing @Lesufi's ego because he can't admit defeat. A 3km radius not accepted?

“Parents and learners are left with unforeseen futures because of this system,” it read.

“Most parents have to turn to private schools, which they cannot afford, because of this rigid system. School applications should go back to the way it used to be.”

Just under 200 people had signed before noon on Monday.

District offices in Johannesburg, Tshwane and Benoni were among those disrupted on Sunday when staff were allegedly intimidated and attacked.

The backlash continued on social media. “Going to the district is every parent's nightmare, you are given no choice, it's a take it or you're on your own. Three years ago my daughter [found] herself in a school we never heard of, further away from home and over crowded. I took her out mid year,” Marco Mwamba said in a tweet to Lesufi on Monday.

The placement process was due to be completed by October 31, but a day before that deadline there were about 77,000 parents who had neither declined nor accepted placement offers for their children.

Patience Moloi said in a tweet that pupils had bursaries that “need proof of placement in order for applications to be approved. Can you act now. This is serious. This system is a complete fail.”

“Haai guys this system is not working. I live in Midrand and now I need to choose from schools that are based in Germiston ... there are not enough schools. I must now settle for a school that I don't want,” tweeted Keneiloe Motsisi.

The education department has now extended the admission placement for the 2020 academic year to the end of November.

Is it legal for private schools to force prospective parents to pay a hefty deposit or fee to enrol their child, and then refuse to refund a cent of ...
News
2 years ago