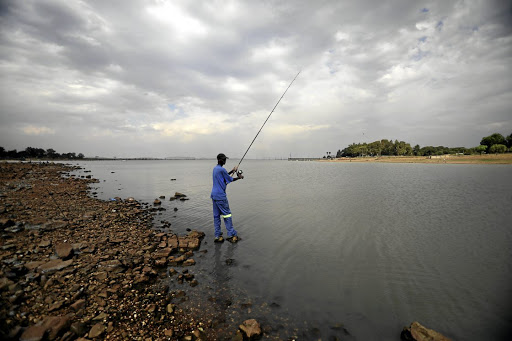 Kelly Mokoena, a fisherman at the Vaal Dam in Deneysville, Free State, where water levels are less than 50%. / ANTONIO MUCHAVE

Rand Water is on the brink of implementing water restrictions in Gauteng, North West, Free State and Mpumalanga provinces as it struggles to manage demand.

Should the current high patterns of water usage not drop, the water utility has announced that it would be forced to impose restrictions by reducing water supply.

This comes as water levels in its reservoirs are drastically declining due to the extremely high temperatures and lack of rain, which prompted it to issue a warning yesterday.

Eddie Singo, Rand Water's executive manager for operations, said: "We've just hit the record high of water consumption, and that's nothing to celebrate, it's a cause for concern."

Singo said water usage should rather be "hitting the record lows".

Joburgers urged to save water

The hot and windy heatwave, coupled with a lack of rain in Gauteng is contributing to the rapid decline in the level of the Vaal Dam.
News
2 years ago

The hot and windy heatwave coupled with a lack of rain in Gauteng is contributing to the rapid decline in the level of the Vaal Dam.
News
2 years ago

"We want to celebrate lower records in periods of this nature, so if our consumers continue to use water the way they're using, we will then be forced to start implementing restrictions and hold water back in the reservoirs."

Joburg Water has already imposed level-1 water restrictions which prohibits the watering of gardens between 6am and 6pm and the washing of paved areas using hose pipes.

Singo said the restrictions will be meant to avoid a total non-availability of water.

He said it was concerning that the high water consumption comes after the department of water and sanitation has called on Gauteng residents to use water sparingly as the Lesotho Highlands Water Project (LHWP) was undergoing inspection and maintenance until November 30. "We're highly dependent on our consumers responding positively or else we need to go to a level where we impose restrictions."

Rand Water said it would continuously monitor all reservoir levels and those of its customers' usage.