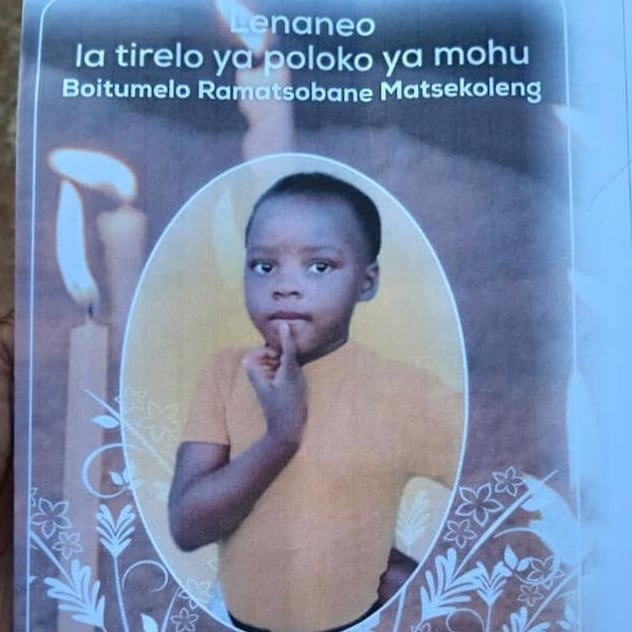 The funeral for Boitumelo Matsekoleng, who died after being raped, was taking place on Sunday.
Image: Limpopo education department via Facebook

The funeral service of six-year-old Boitumelo Matsekoleng, who died from injuries sustained during a horrific rape, was taking place in Ga-Mampane, Limpopo, on Sunday.

Images posted by the provincial education department on Facebook showed scores of school children, clad in their school uniform, filling a white tent prepared for her service.

Matsekoleng's brown coffin was placed in the front of the tent, next to a table prepared for several pastors who were conducting proceedings.

A picture of the little girl, dressed in a pink T-shirt with a finger innocently placed on her mouth, was displayed on her funeral programme.

Among those in attendance was education MEC Polly Boshielo, who addressed mourners.

Matsekoleng had spent two weeks in the ICU, where she was being treated for injuries sustained from the rape. But she succumbed to the injuries last week.

SowetanLIVE reported that her family had been told that she had sustained head injuries, which resulted in internal bleeding.

The seven-year-old girl that Nicholas Ninow admitted to raping, has nightmares about him every night.
News
2 years ago

“We had accepted that she was raped and she would subsequently recover to live with the gruesome experience for the rest of her life ... but her death has cut deep into our hearts,” her aunt, Kgolane Maleka, was quoted as saying.

The little girl was a grade R pupil at Baithuti Mohlahledi primary school in Serageng village near Jane Furse.

Police spokesperson Brig Motlafela Mojapelo said the girl was reported missing on September 29 in the Nebo policing area, outside Groblersdal.

“On the day of her disappearance, the community went out and looked for the girl. It was reported that she was last seen with a known man,” Mojapelo said.

Mojapelo said the girl was later found having been brutally raped.

A 34-year-old suspect was later arrested. He appeared in court where his matter was postponed to December 3 for further investigation.

The man who allegedly raped seven-year-old Boitumelo Matsekoleng, causing injuries that eventually killed her, has been linked to a series of crimes.
News
2 years ago
Next Article