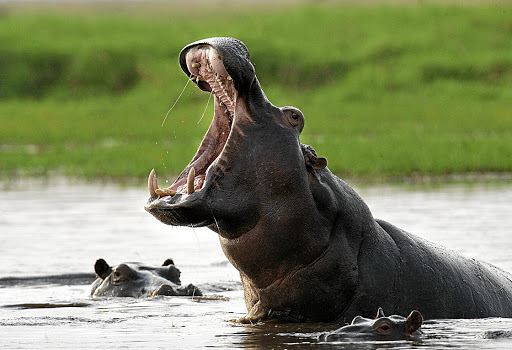 Hippos are source of danger to villagers living near Kruger National Park.

The killing of a 63-year-old Limpopo woman by a hippo at a village near Kruger National Park has highlighted the danger faced by people living near the world-famous park.

Muthavini Luceth Masungwini of Magona village, about 27km east of Malamulele, was crushed to death by a hippo near her home on Thursday night. The pensioner's daughter Tintswalo said she and her mother joined locals at around 9pm that night to be on the lookout for a hippo that was spotted near their home earlier. The hippo was with its cub.

"We joined a group that followed it while it was walking away from the village with its cub. It appeared harmless until it made a sound and turned and started charging," she said.

Tintswalo said her mother fell down while running away and in no time the animal had reached her.

"While it was attacking my mother I turned back and tried to pull her away. [The hippo] left but my mother was bleeding profusely," she said.

Masungwini died from her wounds at the local clinic.

Local chief Busa Nxumalo said animals from the park posed a constant danger to people. Nxumalo also lamented the destruction of the fence that used to keep the animals away.

"There should be an environmental school where locals should be taught how to respond to animals that roam their areas," the chief said.

In 1993, the 28 communities bordering the park formed the Hlanganani Forum to champion their cause. The chairman of the forum, David Maphophe, said the situation for communities living adjacent the park was not an easy one as animals destroy their crops and kill their livestock.

Maphophe said buffalos come out of the park to graze among their cattle.

"They infect the cattle with foot and mouth disease," he said, adding that herds of elephants and hippos destroy their crops.

Maphophe said lions killed many cattle in the area and fed on them, while brown hyenas are also a danger.

Small-scale farmers who plant maize, pumpkins and vegetables on either side of the Makuleke dam have also been complaining that marauding hippos are destroying their fields.

Spokesperson for Limpopo economic development and tourism Zaid Kalla said villagers must report wandering wild animals to authorities when they spot them.