'Artisan is not a man's job' 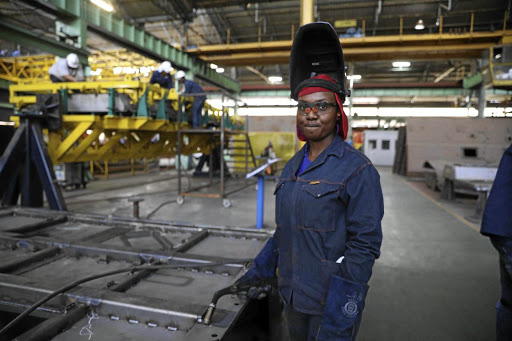 Rinah Ramahlo, originally from Phalaborwa in Limpopo, is an artisan welder at TMH Africa company, which is based in Boksburg, on the East Rand.
Image: Thulani Mbhele

A company that builds rolling stock for state-owned company Transet is on a drive to attract women to its workshop floors.

TMH Africa, based in Boksburg, is a subsidiary of Russian company Transmashholding, which acquired DCD Rolling Stock almost a year ago for R500m.

During its heyday, the company had dozens of women in its employ but currently has about 20. But most of them are in offices and not on the workshop floor.

Rinah Ramahlo, 28, originally from Phalaborwa in Limpopo, an artisan welder at the company and one of the few women on the workshop floor. Her responsibilities, among others, are housekeeping, welding, grinding and operating the crane.

Ramahlo, who joined the company as an apprentice in 2014, believes women can do well in welding and grinding, which were now like her daily bread. "Most women go for office work, I saw an opportunity for women in artisanship and I went for it," she said.

Ramahlo, who studied at the Mopani South East FET college, is already thinking of upgrading her qualification as she wants to eventually become a welding engineer.

Candra Shanice Pedro from the Cape Flats suburb of Bonteheuwel in the Western Cape made national news after becoming South Africa’s first qualified ...
SebenzaLIVE
1 year ago

Another artisan welder at the company, Portia Maloka, 32, from Sebokeng, has been with the company since 2011, and started as one of two women in the workshop.

"This is not a man's job, this company hired me as a semi-skilled worker and took me back to school at Sedibeng College where I studied till N3 and furthered my studies at the South African Institute of Welding," she said. "I love my work too much... and just like other women, I do get to look good and slay after work."

TMH Africa chief executive Jerome Boyet said they were on a recruitment drive.

"Since September we have re-opened recruitment... we have various people joining us every week more or less, we will move to 180 [from 120] in our workforce, hopefully we will be able to do more in 2020."