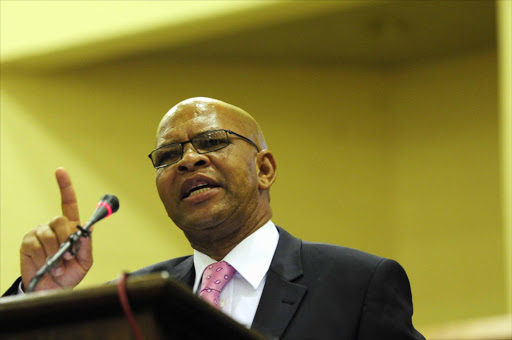 ANC Limpopo chairman Stan Mathabatha said he was unfazed by people saying his leadership of the governing party was weak.

According to Mathabatha‚ he cannot be a weak leader because he was elected to the position without anyone contesting against him‚ not once‚ but twice.

Mathabatha said this after he‚ together with ANC Limpopo secretary Soviet Lekganyane‚ met the ANC top six at party headquarters Luthuli House to discuss "critical issues".

Among the issues were that of ANC Limpopo treasurer Danny Msiza and deputy provincial chairperson Florence Radzilani‚ who were advised to "step aside" following their implication in the VBS Mutual Bank "heist" report by advocate Terry Motau.

Mathabatha admitted that the stepping aside of the two had affected the functioning of the ANC in Limpopo‚ adding that national officials at the Monday meeting had committed to putting the matter of the two to bed with urgency.

Msiza and Radzilani have not been active in ANC affairs for the 11 months since their suspension‚ leaving the provincial officials structure limping with three instead of five elected leaders in place.

Since their "stepping aside"‚ Msiza and Radzilani have been awaiting their day with the controversial ANC integrity commission‚ but Mathabatha said national officials committed that this would happen in the near future.

"They have not appeared before the integrity commission‚ so the national officials are going to ensure they appear‚" said Mathabatha‚ adding that the matter dragging on with no end in sight had nothing to do with him since "the ball is not on my court".

Regarding criticism of his leadership‚ Mathabatha said he was an elected leader who will not be moved by critics.

He said: "I have a very long history of leadership and the record speaks for itself. I am not the one to say whether I am a strong or weak leader‚ but the the fact of the matter is‚ as a leader‚ you will have some people who sees you as strong while some see you as weak.

"That does not concern me at all. What concerns me is whether I am leading the ANC correctly and to that I would say 'yes' because the province I am leading is intact. There is no instability in that province and no internal fighting.

"Above all I have been elected twice by the branches unopposed‚ and my provincial executive committee has never been disbanded. Therefore I do not know how someone says you are a weak leader."