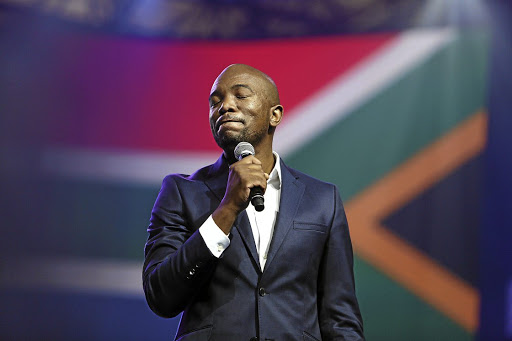 Questions are being asked about self-declared anti-corruption crusader Mmusi Maimane's use of a car donated by fraud accused Markus Jooste.
Image: Alon Skuy

A Toyota Fortuner is threatening to be to DA leader Mmusi Maimane what a VBS Bank- "funded" Range Rover is to EFF second-in-command Floyd Shivambu or what a R500,000 Bosasa donation is to President Cyril Ramaphosa.

But while Shivambu and Ramaphosa may survive their controversies, the fortunes of the lay preacher-turned-politician look less promising.

The Fortuner, donated to the DA by accounting fraud-accused Markus Jooste, is threatening to cut short Maimane's career.

The DA leader is at the centre of a storm over the use of the car sponsored by Steinhoff as well as his declaration of house rent from a Durban businessman.

A senior DA MP who wished to remain anonymous told Sowetan yesterday that Maimane earned enough money and did not need a sponsored car.

The MP said Maimane had "dug himself a grave that will most likely result in him being recalled".

"It's plain stupidity on his part and, dare I say, greed. No one would support what he had done. We pride ourselves on being an anti-corruption party and Mmusi is doing severe damage to the brand. He will be out," said the leader.

"We all own or hire our own cars. He is leader of the opposition and earns more than the average MP. Next will be a [federal] congress. He must just come clean and apologise."

The DA's federal congress, the highest decision-making body, which can remove the party leader, must take place at least once every three years.

City Press yesterday reported that Maimane was using the Fortuner long after allegations of fraud had emerged against Jooste.

The newspaper reported that Maimane had ignored warnings from his DA colleagues about his continued use of the vehicle.

Jooste and others at Steinhoff are accused of accounting fraud, including insider trading dating back as far back as 2015.

Yesterday, Maimane accused his detractors in the DA of championing a smear campaign against himself by leaking information about his personal life to the media.

"The smear campaign continues. These are gutless individuals who will not be named and instead spread lies about me and my family," Maimane posted on Twitter.

DA leader Mmusi Maimane has raised eyebrows on social media after allegations that he drove a Steinhoff-sponsored SUV, despite being warned not to.The claims were published in Rapport. The paper said the car was given to Maimane during the 2016 elections by Markus Jooste, former CEO of Steinhoff. Rapport claimed that after alleged irregularities at Steinhoff came to light, the car was returned.

The DA has been rocked by several controversies recently. These include the resignation of its policy head, Gwen Ngwenya, and an investigation into MP Phumzile van Damme for a confrontation at the V&A Waterfront in Cape Town in which she ended up punching a white man.

The DA under Maimane also took a beating at this year's general elections, with the party's support declining to 20.8% nationally.

"I think it's an orchestrated plan to tarnish his name and this is done by people within the organisation," said Gana.

"I can't say what the goal is because I'm not part of them but it cannot be designed to strengthen the party, I think it's designed to weaken it."

Political analyst Professor Somadoda Fikeni said the latest revelations on Maimane, along with reports of the EFF's alleged links to the looted VBS Mutual Bank and Ramaphosa's donations from Bosasa had brought into question the ethics of the country's leadership.

Maimane has positioned himself as an anti-corruption crusader and has relentlessly pestered Ramaphosa over alleged funding by private businesses.

"The country generally has a crisis of leadership and one part of that is because of an honesty deficit as well as the rule by law instead of the rule of law," said Fikeni.

"Maimane telling Ramaphosa to declare who funded him when he himself, when he was campaigning with [DA MP] Wilmont James, refused to disclose who was funding him, was already indicative of the challenge that we have, where people use the law to play politics."

According to Fikeni, these issues would be resolved by the Party Funding Bill.

"It is urgent that we have these disclosures of personal funding or favours of party funding so that we know who is funding who and whether those people benefit unduly or are protected," he said.

DA leader Mmusi Maimane has raised eyebrows after allegations that he drove a Steinhoff-sponsored SUV, despite being warned not to.
News
2 years ago
Next Article