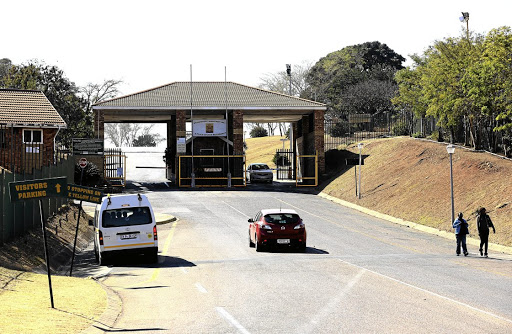 The Baviaanspoort Prison, where four warders have been suspended. /SANDILE NDLOVU

Four correctional services officers at the Baviaanspoort prison, northeast of Pretoria, have been suspended on suspicion of being involved in criminal activities.

This is after a cellphone which was seized from a convict showed they could be linked to a drug and money-laundering ring operating inside and outside the prison.

Three weeks ago, two warders were sent home on
allegations of corruption and fraud.

On Tuesday, another two were suspended after also being linked to illegal dealings with the inmate, who is serving time for fraud and murder.

The inmate was caught with the cellphone during a surprise search in the prison.

Department of correctional services spokesperson Zandile Mabunda confirmed yesterday that three officers had been formally suspended, with one suspension yet to be served on another officer, who is in hospital after a car accident.

"The department continues to work diligently in ensuring that safe custody and rehabilitation do take place uninterrupted," said Mabunda.

"He [the inmate] was admitted at Baviaanspoort in August 2017 from Zonderwater correctional centre."

An insider told Sowetan that the officers had been linked to the illegal operations through communication with the inmate through WhatsApp.

"WhatsApp messages on the gadget revealed that two wardens were in communication with him [the inmate] about illegal activities inside the prison," the insider said.

"The inmate has been causing trouble in the prisons that he came from because he is a loaded man with money.

"He has been able to bring in drugs, money and get warders on his payroll to assist him in carrying out his plans from inside and outside the prison."

In November last year a sting operation at the prison saw two young women being caught in possession of drugs and alcohol which was bound for inmates.

The recent sting operation followed a tip-off received by the department.

The complicity in illegal activities by some other correctional services employees was also being investigated.