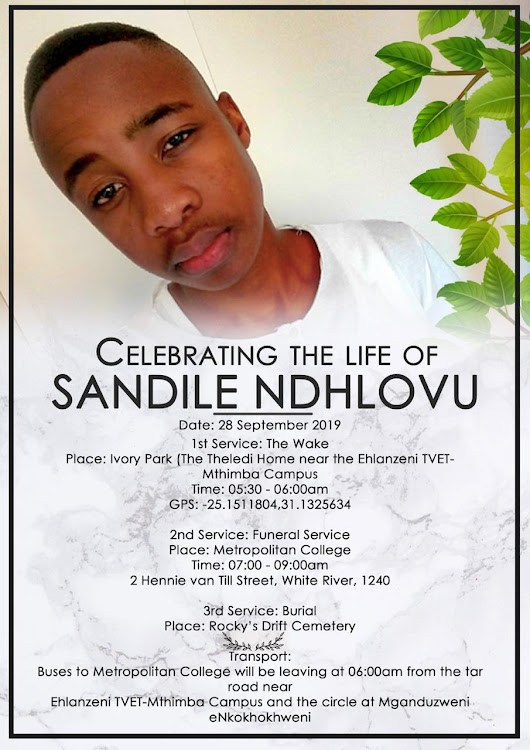 Slain DUT student Sandile Ndlovu will be laid to rest at his Mpumalanga home on Saturday.
Image: Supplied

Slain Durban University of Technology (DUT) student Sandile Ndlovu left his home in Mpumalanga with hopes of returning in a graduation gown - but instead arrived home in a coffin.

Ndlovu’s body was collected from a Durban mortuary on Monday after he succumbed to his injuries on Saturday.

He had been in intensive care after being stabbed in a lecture room two weeks ago.

Ndlovu’s uncle and family spokesperson, Tshepo Mokoena, told our sister publication TimesLIVE on Friday that the body had arrived at the family home in White River, Mpumalanga, and that they were busy with funeral preparations.

The first-year industrial engineering student, who had been described as God-fearing and peaceful, will be laid to rest at the weekend.

Meanwhile, the university said in a media briefing on Wednesday that they believed the prime suspects in Ndlovu’s stabbing could only be fellow students.

There is a fine line between keeping universities safe and turning them into prisons, says minister Blade Nzimande.
News
2 years ago

Sandile Ndlovu, the Durban University of Technology student who was stabbed on campus almost two weeks ago, has died.
News
2 years ago
Next Article