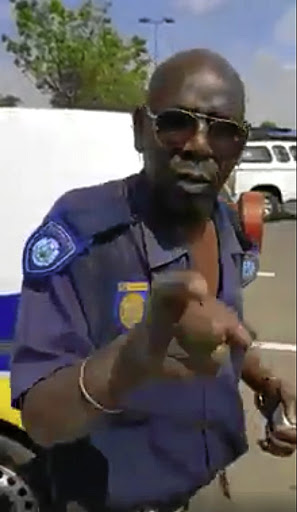 An Ekurhuleni Metro Police Department officer was suspended after a video of him seemingly under the influence of alcohol went viral.

The Ekurhuleni metro police officer who was caught on camera looking intoxicated on duty and two of his colleagues have been suspended.

The city announced yesterday that his colleagues were suspended as they did not act appropriately in dealing with his conduct.

Mashabela said the two other officers who were suspended were a female colleague also caught on the video ushering the alleged intoxicated officer away and a supervisor.

He added that when the officers arrived in Benoni, their supervisor ought to have ensured that blood tests are conducted.

"The supervisor apparently left them in a room and attended to other things. When they left, the supervisor was not there," he said.

A video went viral showing an Ekurhuleni Metro Police Department (EMPD) officer allegedly drunk in full uniform with a colleague who tried to save the officer from public embarrassment.

In the video the officer was captured on camera struggling to even speak or stand upright in a parking lot. In the video shared by @CitrusRamaphosa, the officer can be seen holding a phone and cigarette pack in his left hand as residents take videos of him.

"Is everything alright?" the officer mumbles to the residents who are taking the video as the officer's colleague keeps on urging him to leave.

The female colleague ultimately succeeds and pulls the officer to an EMPD vehicle.

As the officer gets into the vehicle, the man taking the video continues to call for him to be tested.

"I've been asking them to test you and they have refused. That's why we'll post this on YouTube and Facebook. We asked for you to be tested and they refused," the man said.

Finally, the officer's colleague succeeds in getting him into the car while residents read out the vehicle registration.

One of the men known for stopping motorists for drunk driving has been caught in the act – drunk and on duty.
News
2 years ago

The Ekurhuleni metro police officer who was caught "drunk" on camera while in full uniform has been suspended. This was announced by acting ...
News
2 years ago
Next Article