Law graduate not blind to adversity 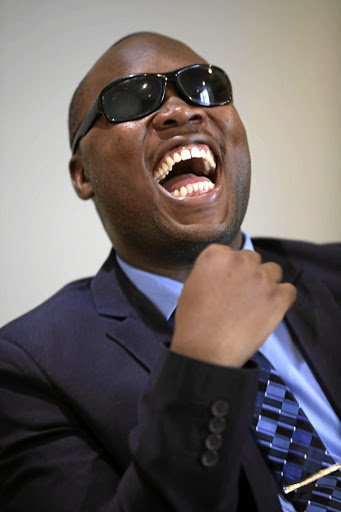 Thabang Manamela often struggled to read the chalkboard as he was slowly losing his eyesight at primary school.

Manamela, 25, from Ga-Mashashane, Limpopo, recently graduated with an LLB degree from the University of Pretoria.

Partially blind Manamela was diagnosed with glaucoma, which resulted in him losing his eyesight at an early age.

He lost a substantial part of his eyesight but that did not stop him from achieving his dreams.

Sowetan visited Manamela at his workplace at VDT Attorneys in Brooklyn, Pretoria, where he is a candidate attorney.

Manamela cut a confident figure in a navy suit and a powder blue shirt. He sat comfortably in the boardroom, which in no time was filled with his infectious laughter in between responses to questions.

"I am excited about this milestone in my life. I have had many dreams and being a qualified attorney was one of them. I love getting a different explanation to things that are happening and I have always been interested in solving problems," he said.

He said when he joined the University of Pretoria in 2015, he had to learn to adapt.

"The institution was huge and I had to share a lecture room with more than 400 people, which was way different from my high school where I shared a classroom with only 12 pupils. I used to rely on braille but when I joined UP, I had to fully rely on computers," he said.

He would record all his lectures and type up his notes using a computer software programme that enables visually impaired people to read text on a computer screen.

"However, with time it got better and the institution's disability office helped me to get my way around campus. They also helped me with extra time for tests and exams.

"I had friends who helped me navigate around the campus and these days I know all the corners of UP campuses," he said.

He said that the only serious challenge he experienced was people's attitudes, which could be a serious barrier.

"There are those who think the quality of what you can give is less important because of your situation.

"But I learnt to teach people how to treat me. Never allow people around you to ever think of you through the prism of disability.

"As a result, ask for and receive as little help as possible from people around you."