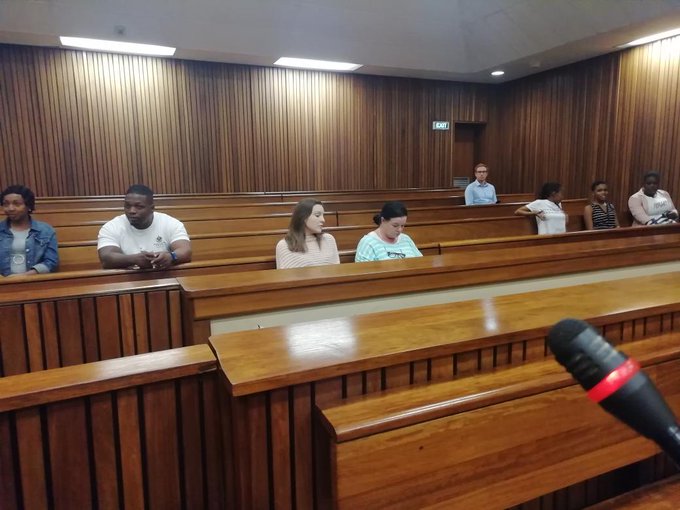 Nicholas Ninow's mother Chantelle (left, in centre of image) and grandmother Pauline Gericke (in the blue striped top) have been at court over the past two days.
Image: Nomahlubi Jordaan/TimesLIVE

Nicholas Ninow was living with his grandmother before he allegedly raped a seven-year-old girl in a restaurant bathroom a year ago. This week, Pauline Gericke was seated in the Pretoria High Court as he pleaded guilty.

In the past two days, his mother Chantelle Gericke has also been in attendance, to hear the evidence the prosecution is leading against her 21-year-old son.

Nicholas Ninow in court on day 3 of his trial. Court held in camera as the child is about to testify. pic.twitter.com/uRm4gLNjYp

In February, police in Pretoria confirmed that Chantelle's boyfriend had committed suicide. His body was found in a house at their townhouse complex. The man had been facing a charge of assault before his death.

In the early days of the trial, Ninow's Legal Aid lawyer Riaan du Plessis told the court he was a troubled youth. He had been diagnosed with bipolar disorder in January 2013, and had undergone treatment for substance abuse as a teenager.

Du Plessis said a psychiatrist had advised him that Ninow had harmed himself previously. “My instructions are that they were indeed suicide attempts from the accused because of severe depression,” the defence lawyer said.

Ninow was subsequently sent for psychiatric evaluation and declared fit to stand trial.

On Monday, Ninow pleaded guilty to charges of rape, possession of drugs and defeating the ends of justice relating to the attack on the girl in the Dros restaurant in Silverton in September 2018. He said the attack took place while he was intoxicated on drugs and alcohol.

The state has disputed some of the evidence in his plea explanation and is leading evidence.

Ninow - reported to have become engaged to a young woman in the month before the Dros rape - was caught in the women's toilet section of the restaurant by its staff and the victim's mother.

Du Plessis said previously that he had sustained some injuries when customers at the Dros had hit him on the head with a broken beer bottle. His injuries included a cut to his right ear‚ resulting in four stitches‚ two cuts to his forehead and a bloodshot left eye. He also alleged police abuse after his arrest.

Ninow's young victim is due to testify on Wednesday, via a broadcast link to a closed court.