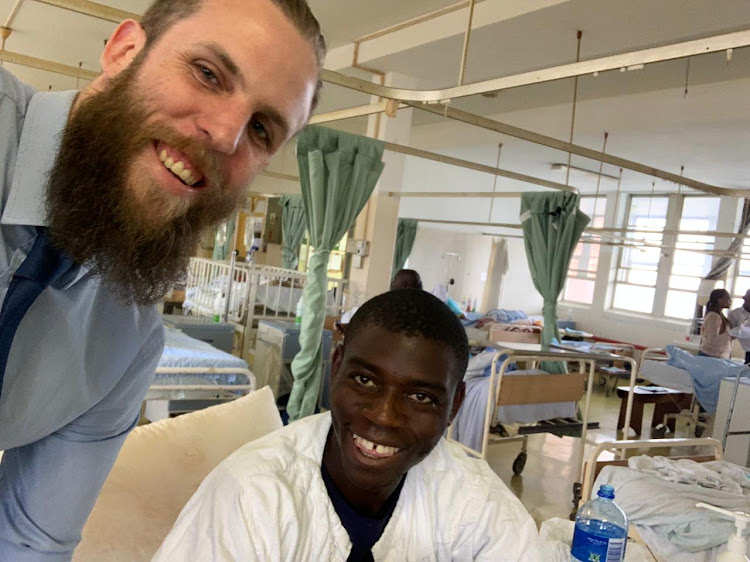 Durban resident Johnathan Cookson went to great lengths to help Jaden Gonyor, who was badly hurt when he jumped off a bridge to escape muggers. Cookson went as far as searching hospital wards to find Gonyor.
Image: supplied

Durban resident Johnathan Cookson thought he had arrived at a hit-and-run scene when he pulled over to help a seriously injured man in the middle of the M13 highway recently.

But when he learnt that Jaden Gonyor had actually jumped off the overhead bridge to escape muggers, Cookson knew he had to do more to help him.

"I was driving on the M13 on August 31 about 5pm and there was a guy lying in the middle of the road just below the bridge. His leg was  just hanging by the flesh. He was screaming. I thought it was a hit and run so I pulled over.

"I called the police to report it, ran over to him, got him out of the road and tied up his leg with one of my shoelaces because he was losing a lot of blood and was in a lot of pain," Cookson told SowetanLIVE's sister publication TimesLIVE on Tuesday.

Police have arrested a suspect in connection with the mugging of a woman in Cape Town - video footage of which went viral on social media.
News
3 years ago

A suspected mugger was arrested on St James beach in Cape Town on Saturday shortly after a jogger was robbed at knifepoint on the nearby "catwalk" to ...
News
3 years ago

Gonyor told Cookson he had jumped off the bridge to escape muggers, who managed to flee with his phone and rent money.

"He kept saying that he didn’t know how he was going to inform his brother," said Cookson.

An ambulance arrived and took Gonyor to hospital, but Cookson couldn’t stop thinking about him.

"I was struggling with the whole thing because here was this injured man, who was broke and his brother wouldn’t know what happened." 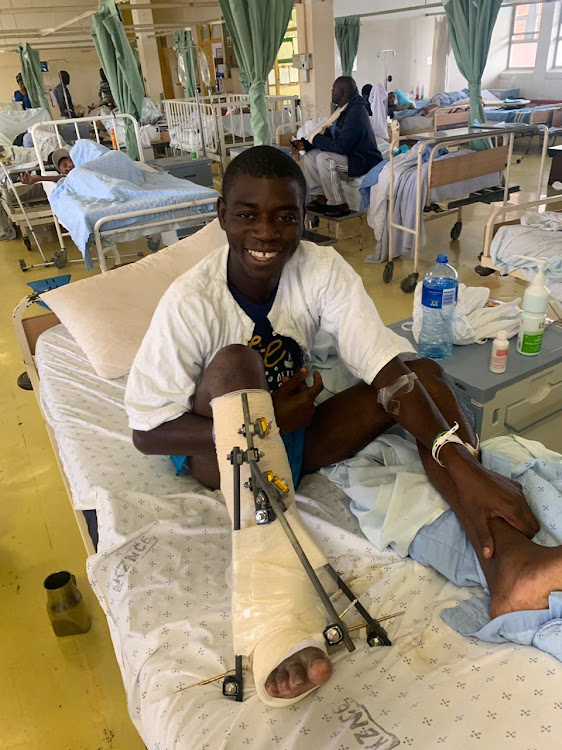 "I obviously misheard his name because I had asked for Aden. I finally got a call back to say that he was most likely in RK Khan Hospital," Cookson said.

Cookson went to the hospital the next day but couldn’t find an Aden.

"I then walked through all the wards and when I got to the last ward, Jaden was there. He was absolutely shocked to see me," Cookson said.

He managed to contact Jaden's brother and promised to pay his rent.

"I then visited him twice after that. He had his surgery on Thursday and the doctors managed to save his leg, but he can't walk," Cookson said.

He plans to visit him again at the weekend.

Cookson said Gonyor had been released from hospital but is bedridden.

"He is the only breadwinner in his family, even if he was only working one day a week as a gardener. He now cannot work and I just feel terrible for him."

Cookson hopes that South Africans will rally around Gonyor and donate money towards his day-to-day living and medical expenses.

"He needs all the help he can get," Cookson said.