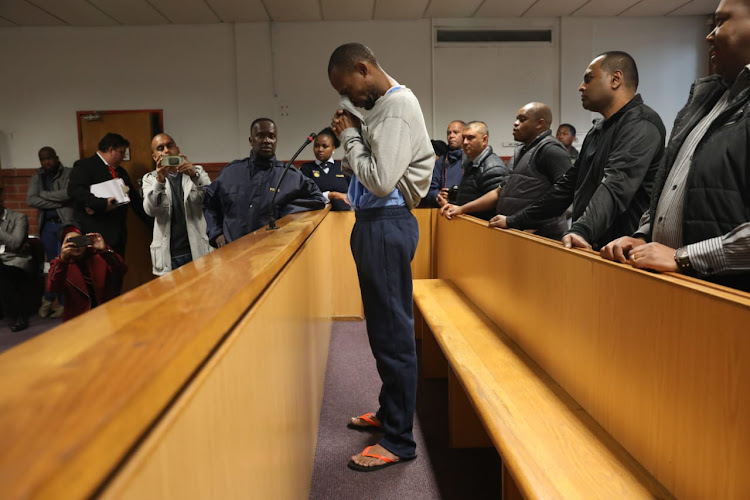 Sbu Mpungose limped into the Pinetown magistrate's court on Friday, two days after he was caught hiding in bushes and arrested for the deaths of his four children.

Mpungose is accused of murdering his children, Kuhlekonke, 4, Khwezi, 6, and Siphesihle Mpungose, 10, who were found hanging at their Wyebank home by their mother Xolisile on Tuesday afternoon.

He also faces another count of murder after he allegedly fetched his stepdaughter, Ayakha Jiyane, 17, from school that same afternoon. A search was mounted for the grade 11 Pinetown Girls' High School pupil after she was last seen leaving her school, but didn't turn up at home. The teen's body was found late on Tuesday night, hanging from a tree in New Germany.

The man, who appeared deadpan throughout proceedings, and who at times used his jersey to wipe tears streaming down his face, abandoned his bid for bail.

The matter was postponed to October 9 for further investigations.

Footage of him in shackles surfaced on social media with speculation that he had been assaulted after he was arrested. Women can be heard taunting him that he hadn't been "burnt enough" and that when he returned "they should cut off his penis and kill him".

However, SAPS spokesman Colonel Thebeka Mbele said: "The suspect had slight injuries he sustained while running in the bush and had to be taken to the clinic. The information circulating that he was assaulted in jail are untrue."

Durban teacher Xolisile Mpungose wept as she clutched KwaZulu-Natal MEC for social development Nonhlanhla Khoza's hand and described the horror that ...
News
2 years ago
Next Article